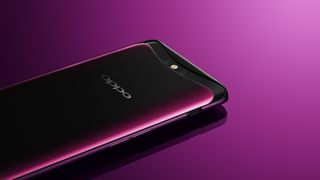 Chinese manufacturer Oppo generated a lot of press last year thanks to its innovative Find X smartphone, which was notable for its bezel-free display and motorized pop-up selfie camera.

Now, it appears the phone maker is getting ready to launch a successor to its flagship Find X, with Dutch technology site LetsGoDigital reporting a new EUIPO (European Union Intellectual Property Office) trademark filing from Oppo for a device called 'Find Z'.

Little is known regarding Oppo's plans for the Find Z, though LetsGoDigital speculates that the device may abandon its predecessor's divisive pop-up design in favor of a selfie camera housed within a pinhole cutout.

Find Z is also expected to boast 10x optical zoom and a Snapdragon 855 processor (last year's model featured a Snapdragon 845 SoC), with the latter rumor based on a flagship prototype that Oppo reportedly showed off at the China Mobile Global Partners Conference in Guangzhou last month.

While the Oppo Find X's motorized design was certainly novel at the time of its release, the phone itself lacked many of the features that people have come to expect from a flagship device, such as water resistance and a fingerprint scanner.

In our review, we also noted that the Find X's pop-up mechanism seemed destined to break over time. If the Oppo Find Z does end up seeing the light of day, hopefully it will provide solutions to these issues.