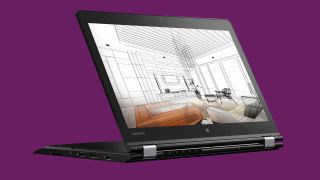 With the Yoga branding, the ThinkPad P40 Yoga is a convertible laptop with a 360-degree rotating screen. Designed for digital artists, users can configure the resolution with up to a 2,560 x 1,440 panel, and the screen comes Wacom Active ES technology for use with a digitizer. The screen supports up to 2,048 levels of pressure sensitivity, but the Pen Pro is an optional accessory for the convertible.

The system can be configured with up to 16GB RAM, a 512 solid state drive for storage and Nvidia Quadro M500M graphics. The ThinkPad P40 Yoga is Mil-SPEC tested for durability, and the notebook comes with Lenovo's Lift 'n Lock keyboard, which locks the keyboard in laptop mode.

The P50s features a 3K resolution display, Nvidia Quadro M500M GPU, up to 32GB RAM and up to 1TB HDD or 512GB SSD drives. Battery life is estimated at 17 hours with Lenovo's Power Bridge battery technology.

Equipped with Intel's Xeon processor, Lenovo is billing the ThinKStation P310 as a workstation at the price of a desktop. The P310 is available in either a tower or small form factor desktop form factor. The PC can be configured with Intel's Skylake Core i3, i5, i7 or Xeon E3-1200 v5 processor. Memory tops at 64GB DDR4 with four slots.