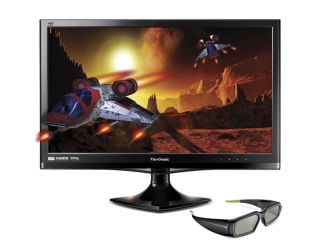 ViewSonic has unveiled its latest LED monitor, the V3D245, a 3D affair that comes with Nvidia 3D know-how.

And just where can you get all this dazzling 3D content from? With an HDMI 1.4 input, you can hook up a Blu-ray player, with the Nvidia goodies, you can run 3D games from an Nvidia GeForce-equipped PC, or you can just hop on to the good old internet.

If you can't shell out for separate speakers, the monitor comes with integrated two-watt SRS Premium Sound speakers.

"It's a neat solution with the built in Nvidia transmitter, that uses LED technology to bring better contrast ratios and significant power savings, but can then revert back to a high performance 2D monitor when required," said James Coulson European marketing manager, ViewSonic.

ViewSonic's V3D245 3D monitor and bundled Nvidia 3D Vision active stereo 3D glasses come with a UK release date of mid-to-late September, and the whole shebang will set you back around £350.