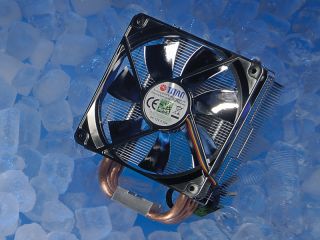 Your PC will perform better if it's keep cool

One fundamental enemy of the continuing quest for frame rates is plain old heat. Sitting among all the high-tech voodoo of your PC is the humble cooler, simple and vital.

The boggo-standard fans fitted to most PCs are, frankly, a bit pants-like. There are much better aftermarket ones and if you plan to go overclocking then you'll need a decent one.

Designs of coolers have stabilised recently and the basic construction of all these tower coolers follows the same pattern. A spreader sits on the processor at the bottom of U-shaped heat pipes, which then rise through a stack of cooling fins, while a fan blows air across them.

The heat pipes contain pressurised fluid, this evaporates at the bottom and condenses at the top, using latent heat to transfer lots of energy in the process. The more pipes there are and the fatter the pipes, the better the heat flow.

Also look for direct touch pipes, where the heat pipe is in direct contact with the top of the processor, this is a good thing.

A PWM (Pulse-Width Modulation) fan is another good cooling alternative, as your motherboard can regulate the fan speed at will, saving the full whirring fury for when you need it.

One important question to ask yourself is: are you going to regularly remove your heatsink? If you are then pay attention to the fitting, because some of these are quite unsuitable and others are a breeze. One broken plastic bit takes you out the game if you're not careful.

AMD uses a sprung clip of course, with mixed results, while Intel has the full heavyweight four point fixings with (usually) a backplate. Design approaches range from the theatrical with an eye for looks as much as ability, through over-engineered excellence to cheap and moderately cheerful. Some we loved, and some we just wanted to stamp on at times.

There are four 8mm heat pipes with direct touch. The fins have, it says here in the press release, a unique low-drag coefficient, yeah whatever.

It comes with mounting options for the full AMD and Intel set and boasts a maximum TDP of 160W, above any desktop chip's figure.

The Fenrir is what we are going to call 'full-size', that is to say it stands a whopping 165mm proud of the motherboard. It's size isn't refl ected in the amount of noise it makes either.

The wide PWM 12cm fan proves to be commendably quiet, and, more importantly, has shiny silver blades. It only fits one side though, so no two-fan action. The fittings are sturdy and easy to use and the included knurled nuts (stop that), making it easy to take on and off.

Performance is more than adequate and the price, well, not bad. It does have a certain style too. Good dog.

This gothic creation features a fetching gloss-black nickel finish and an usual design of interlacing fins. The Hammer boasts a lot of pipework too, with four main 8mm pipes with direct touch and another three inner 6mm ones on top of those.

As well as AMD's offerings it copes with LGA 775 and 1366 (but not 1156 at time of writing, so check if your motherboard). Fitting proved a proper pain in the rump as the sprung bolts can't be turned by hand readily and are rather inaccessible for the tiny supplied spanner. Not one you would want to remove very often then.

There's no fan supplied either, just the rubber fittings for two. It runs cool at idle, but isn't as chilly as we had hoped under load, more airflow is required. Just to see how useful it is without a fan, we took it off to see – we eventually powered the PC down at 100°C. You do still need a fan then.

It does have a reputation among overclockers as having potential. It is a jolly silly name though.

The aggressive-looking Yasya features a set of fins that look like they have been designed to draw blood. There are six 6mm heat pipes, rather than the more usual 8mm jobs in tower coolers, but it does fit both AMD and Intel.

The Yasya boasts tool-free fitting, which introduces us to the horrible plastic push-pin fittings and no supporting backplate for you Intel boys. These things are horrible, they break, are not suitable for repeated removal, cannot be adjusted and mean pressing down hard on your board. Mr. Dexter claims to have broken "loads".

The 12cm fan can be fitted either side using wire clips, which are not much fun either. The big extra here is a PCI backplate with a rotary fan control, which worked a treat and is either a welcome boon, or an unnecessary complication.

Its cooling ability trails behind the other big coolers a tad. For the money there are better, less dangerous, coolers, unless you are charmed by manual fan control.

For a Core i7 compatible cooler this is a compact beast, with a svelte fin stack that is smaller than the 9cm fan housing. It has just two 8mm heat pipes. As you might guess from the name it fits LGA 1156 boards only, but it fitted snuggly on our test motherboard no problem, so what the heck.

If space is an issue this would do nicely. Fitting is handled by the thrice-dammed plastic push-pins. They well might be 'tool-less', but honestly, we can all get hold of a screwdriver if we need to.

Performance is no big surprise, it ran hotter than the big boys, hardly a surprise given proportions and to be fair, we are going beyond the design parameters here with a i7 920. It is still stable, but leaves little room for error, we asked too much perhaps.

It is supposed to be 'silent', and, fair dues, the fan is a quiet one. It is quite cheap; always a good thing, but lacks cooling power for the full i7 range and isn't one for exploring overclocking too much.

Current page: How to keep your PC cool