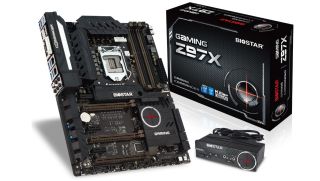 The rather exquisite Biostar Z97X motherboard.

Biostar has announced a motherboard, the Gaming Z97X, that comes with two very peculiar features that extend its appeal beyond the gaming community it is targeting.

It offers two 4K-capable HDMI ports, albeit at 24Hz, which should make gaming impossible but might be suitable for office usage.

It is also the first motherboard we came across that offers USB 3.1 connectivity, a new standard that not only doubles the data transfer rate to 10Gbps but can also drive more power hungry devices like laptop and monitors.

In addition, the board comes with a nice little breakout box called the Gaming commander that fits in a standard 5.25-inch bay and offers additional audio features (but no USB ports sadly).

The ATX-sized motherboard doesn't yet have an official release date or pricing.