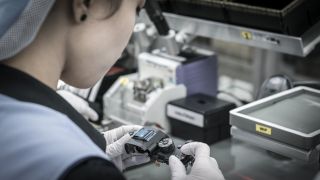 Earlier this year, TechRadar and a select group of other European media outlets were invited to take a look around Sony's Chonburi camera and lens production plant in Thailand.

Located about a 90-minute drive from central Bangkok, the plant is now Sony's main production line for its Alpha cameras, including both the flagship Alpha A9 and forthcoming Alpha A7R III. It also manufactures most of Sony's growing range of lenses, including its premium G Master line.

When most people purchase a premium piece of camera kit they expect to see the words 'Made in Japan' stamped somewhere. However, while Sony undertakes all its camera design and development, as well as sensor manufacturing, in Japan, the company believes its Thai workforce now has the breadth of experience and skills to produce its high-end imaging hardware.

Sony first established a manufacturing operation in Thailand back in 2003, which mainly assembled car audio equipment and mobile phones. It was in 2009 that Sony started manufacturing digital imaging products – primarily low-end consumer cameras and the budget 18-55mm zoom lens sold with most Sony DSLRs at the time.

After the severe flooding that rocked the country in 2011, Sony Technology (Thailand) Co Ltd set up two new factories, and moved all its digital imaging to Chonburi, which isn't threatened by flooding.

Sony isn't the only Japanese firm to set up production lines in the country, with some 400 Japanese companies having interests in the vast industrial estate south-east of the Thai capital. With good air and sea transport links, Chonburi is in an ideal location to both receive parts and export finished products quickly. Factor in a skilled labor force that costs considerably less than in Japan, and it's easy to see the appeal.

In 2013 the plant started manufacturing Sony's first forays into the full-frame camera market, the Alpha A7R and A7, which meant more demands were put on the production line. With more complex mechanisms and components, stringent dust control and premium-quality materials involved in the production, it required an enhanced infrastructure.

Working closely with Sony's Tokyo HQ design team, the Chonburi team developed an advanced manufacturing system, while the company has worked hard to instil a sense of 'monozukuri', which roughly translates as craftsmanship in English, in its local workforce.

This, together with adherence to another Japanese philosophy, 'kaizen', or small, continuous improvements, has enabled Sony's Chonburi plant to produce some of the most advanced cameras and lenses on the market today.

Despite increasing automation, what strikes you when you walk around the final assembly floor for the Alpha A9 is how labor-intensive the whole process is, with lines of young Thai operators studiously at work.

Each operator goes through a rigorous training program before joining the assembly line, and undertakes a single element in the production of a A9, from working on the top cabinet to the shutter assembly, before passing the unit on to the next station.

As we walked round the assembly line we could see the Alpha A9 gradually taking shape, with finished cameras going through a series of quality control checks and adjustments before being packaged up ready to be shipped.

While we were lucky enough to see first-hand how much skill and expertise goes into the production of Sony's Alpha A9, you only have to pick up one of the cameras and shoot with it to appreciate that the words 'Made in Thailand' no longer need to be viewed with skepticism.