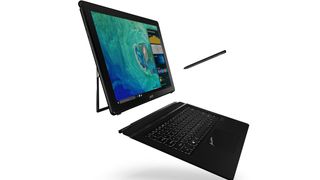 This year’s CES 2018 event has only just started but we’ve already witnessed some exciting surprises, the latest being Acer and Asus announcing that they're bringing support for Amazon’s Alexa voice assistant to their laptops.

This follows news that Amazon is making it easier to integrate Alexa into a range of different devices, while we’ve begun to see Alexa pop up in unexpected places.

News that two major players like Asus and Acer are getting behind Alexa will be a huge boost for Amazon – and could prove uncomfortable reading for Microsoft, whose own voice assistant, Cortana, is supposed to be the go-to voice control for Windows 10 laptops.

However, this may not mean the end of Cortana, as last year it was hinted that Amazon and Microsoft were looking at working together to allow their voice assistants to communicate with each other.

Acer has announced that Alexa support will be coming to a select number of its laptops. These are the Aspire 5, Aspire 7, Spin 3, Spin 5, Switch 7 Black Edition, Swift 3, Swift 5, Swift 7, Aspire Z24, Aspire U27 and Aspire S24.

Jerry Kao, President of IT Products Business of Acer Inc, stated that “Acer is excited to be among the first brands to bring Alexa to PCs… we’re providing consumers the possibility to interact with multiple voice services on their notebook or desktop.”

Asus also announced that select 2018 models of its ZenBook and VivoBook laptops will support Amazon Alexa, allowing users to use their voices to control the devices.

These upcoming ZenBooks and VivoBooks will be announced in the first half of 2018, although Asus did not specify if certain markets will get Alexa support before others. We’ve reached out to Asus for clarification.

Steve Chang, President of Asus North America, said that “combining Alexa with Asus PCs will allow customers to complete a variety of formerly complex tasks, simply by speaking. This allows customers greater efficiency and allows them to spend more time on their own passions”.

Hopefully we’ll get our hands on these new Acer and Asus laptops soon to test out how well Alexa works on Windows laptops.