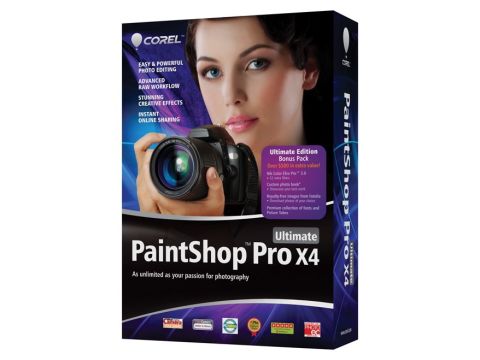 PaintShop Pro X4 is overflowing with both new and enhanced features. Replacing PaintShop Photo Pro X3, and now omitting the word "Photo" in its title, Corel PaintShop Pro X4 seeks to address the issues raised by its predecessor's users, who delivered a mixed response thanks to issues with both stability and performance.

It seems that - in light of the extensive user feedback that Corel started collecting at the beginning of the development process for PaintShop Pro X4 - the creator has taken the red flags that X3's critics raised seriously, working hard to produce a more streamlined, comprehensive package than anything it's released before. Corel also offers a free 30-day free trial on its website, so you can try before you buy.

We're pleased to see that Corel's commitment to keeping its software affordable -as well as powerful - continues, with several different versions of the software being available, starting at just £44.99 for an upgrade or £79.99 for a full Ultimate edition package, which includes some added extras that we'll discuss later.

Corel PaintShop Pro X4 incorporates a significant number of new and upgraded features over its predecessor - 75 to be exact - so there's plenty to explore.

The first of the new developments is a set of HDR (high dynamic range) tools that have undergone a complete overhaul. There's an Exposure Merge option that offers a decent range of presets, as well as the opportunity to manually control the merging process and save your own presets.

The Batch Merge facility will appeal to prolific HDR enthusiasts who are happy to leave the processing up to the software, having it merge numerous bracketed sets of shots while you get on with something else.

Also new is a Fill Light & Clarity tool, which helps to lift the shadows in underexposed areas of your image and enhance detail, to improve backlit shots and those with uneven lighting, for example.

Photo Blend is ideal for merging multiple group shots where, for example, someone is looking the wrong way in one, while someone else is blinking in the other. Just combine the two to create the perfect image. It's also useful for removing distractions from backgrounds or creating surreal photos with multiple cloned subjects.

Selective Focus creates Tilt/Shift-style effects, making your subjects seem miniature in comparison to their surroundings. Or you can use it to blur distracting backgrounds if you find the depth of field in your shots is too wide.

The new Vignette Effect similarly helps to soften the impact of distractions, enabling you to darken or lighten the area surrounding your subject.

Next Page Performance and ease of use