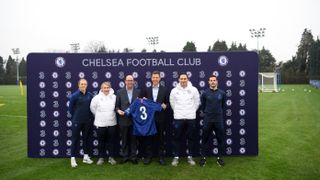 Three has signed a deal to become the official shirt sponsor of Chelsea FC from next season, providing the mobile operator with greater visibility and marketing clout as it continues its 5G rollout.

The company’s logo will adorn the kits of the senior men’s and women’s teams, as well as the club’s academy sides from the start of the 2020-2021 campaign. By that point, Three would have hoped to have launched 5G mobile services.

A 5G-enabled Fixed Wireless Access (FWA) broadband service was made available in central London last August and Three had planned to go live with 5G mobile in 25 towns and cities before the end of 2019. However it has delayed this window until Q1 2020, saying it needed more time to get everything ready.

The Chelsea partnership will be a significant boost to its marketing efforts as it looks to win market share from the likes of EE, O2 and Vodafone.

“Chelsea FC is many teams in one club – and it is important to us that this sponsorship covers not only the men’s team, but also the women’s and the Academy as well,” said Three CEO Dave Dyson. “Three UK has enough 5G spectrum to put us in the top 10 holdings in the world and give our customers the very best 5G service, and we want to be with the team that can drive that winning message over the next few years.”

Although Three’s logo has adorned the shirts of the Ireland national rugby union team and the Australian cricket team, the UK division has never sponsored a Premier League team before. In the late 1990s and early 2000s, tie-ups were common with O2 sponsoring Arsenal, Vodafone teaming up with Manchester United and One2One securing an agreement with Everton.

This latest agreement will be more of an integrated partnership, as is common with modem major commercial deals, as Chelsea seeks to accelerate its digital efforts.

“Mobile technology has revolutionised the way football clubs and supporters interact with each other which makes Chelsea FC and Three such natural partners,” added Guy Laurence, himself a former Vodafone UK CEO.

“We have a social media following of over 100 million and the official app, The 5th Stand, has had nearly four million downloads. We stream live women’s and Academy football with men’s first team highlights available soon after matches.

"It truly is an area from which regular fans are benefitting and as communications technology develops in the coming years, Three will be at the forefront of the advances with the exciting roll out of 5G networks, helping to enhance and expand the experience of being a Chelsea supporter in the modern digital age.

“With Three, we have found a partner, who share our passion for innovation and we are delighted to have them on board and on our shirts.”