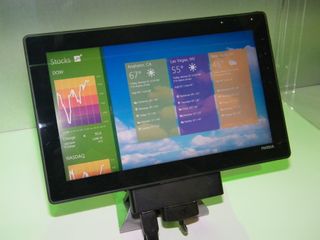 Nvidia is demoing a prototype Windows 8 tablet here at CES 2012.

The tablet packs Tegra 3, like the recently released Asus Eee Pad Transformer Prime. But instead of running Android 3 or 4, Nvidia is trialling

, which is newly compatible with ARM-based processors such as Tegra, as well as the Intel and AMD line of x86-based chips.

The tech demo is an interesting one since other Windows 8 tablets we've seen - such as the Lenovo IdeaPad Yoga - are mostly packing Intel chips.

The tablet was demoed during Nvidia's CES press conference, when CEO Jen-Hsun Huang said it would be a "fantastic year for tablets" with Windows 8 and Android 4.0 Ice Cream Sandwich.

As we've previously talked about here on TechRadar, Tegra 3 comes with a 'hidden' fifth processor (it's quad-core anyway) and a tech called DirectTouch uses this power to enhance the touchscreen operation.

Nvidia was also showing off Tegra 3's Full HD capabilities, outputting content from the tablet to a Full HD TV.