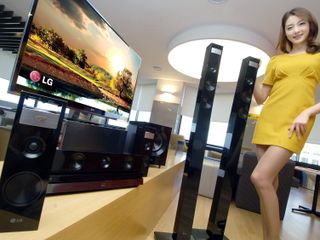 LG has announced four new home theatre systems will be shown off at CES 2012 including the LG BH9420PW which comes with the Korean giant's latest 3D sound technology.

The LG BH9420PW incorporates LG's proprietary '3D Sound Zooming tech' which will apparently, and intriguingly, match the sound with the location and movement of the on-screen 3D images.

It does this based on an algorithm that analyses the depth of the on-screen objects on the 3D TV and LG believes that this will "immerse and surround" viewers.

The LG BH9420PW is a 9.1 system which adds an additional upright 3D speakers to a more traditional 5.1 setup.

"Meanwhile, a 360-degree reflector inside each of the upright 3D speakers reflects sound in all directions, creating acoustics as rich as those in a concert hall."