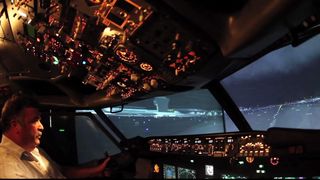 Is that a jet plane in your garage or are you just pleased to see me?

Poor little Android has been dissed by Google co-founder Larry Page, who thinks it's good but "not critical" to the company.

To add extra-terrestrial insult to robotic injury, he and Eric are joining James Cameron on a mission to outer space. We're sure that's not all that critical to Google either but whatever.

Sad robot –Larry Page has described Android as "important, but not critical" to Google, like a step-kid it doesn't mind but doesn't love. Well. Android will never give Uncle Goog a kidney now, will it. [Guardian]

Intergalactic, planetary, planetary, intergalactic - He's been to the bottom of the ocean, he's wrung the Titanic disaster for all its commercial worth and now James Cameron is off to space along with Larry Page and Eric Schmidt of Google fame. Why? The smart money's on something to do with asteroid mining. They might want to give Michael Bay a call given the experience he has in that arena. [Technology Review]

Art of almost – Now you can save your Draw Something masterpieces and post them on Facebook or Twitter from within the app (iOS only for now, Android coming soon). So, yeah, might want to hide the app from your news feed lest Draw Something become the new Farmville. [Guardian]

A little less Sixteen Candles – It's your birthday so I've got you a one month subscription to Netflix. No I did not forget it was your birthday. I bought it two weeks ago actually. Your real present is under my bed. I've lost your address. The post office was closed. Happy birthday. [Netflix]

Sing it back – Apparently you can navigate this website by singing at it. We couldn't bring ourselves to, so you try it and tell us if it's a hoax or not. [TrendHunter]

One way or another – Here's Andy Warhol giving the fill tool a good work out while creating a portrait of Debbie Harry on a Commadore Amiga. It's about as '80s as it sounds. [Kotaku]

Leaving on a jet plane – If you have easy access to the nose of a Lufthansa Boeing 737-100 then you too can create a hyper-realistic flight simulator in your garage like James Price has. "Everybody has to have their crazy hobby," he explains. Best crazy hobby ever! [San Jose Mercury]

Amazon ransom - Amazon and its sneaky cloud computing infrastructure now controls 1 per cent of the internet (in North America, at least). We, for one, welcome etc etc. [Wired]

No time for cameras – There's a fake Instagram app lurking on a Russian website that is not a $1 billion retro camera app but is actually malware. So Android-loving instafans should be sure just to download the app from Google Play to be on the safe side. [Sophos]

Vimeo killed the radio star – Public voting for the 2012 Vimeo Awards is now open. Proper judges include Edgar Wright, Stacey Peralta and everyone's favourite distracted puppy James Franco. You can even pick up tickets to the awards show if you're going to be in NYC on June 7. If so, may we stow away in your luggage please? [Vimeo]