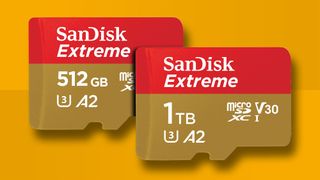 If you're looking for a cut-price storage deal, Amazon has slashed the cost of the SanDisk 1TB Extreme MicroSDXC UHS-I Memory Card from $450 to $250 in a standout storage deal - a saving of about 44%.

Announced earlier this year, this is currently the only way to get a 1TB memory card into a smartphone, and thanks to the price drop, compares more than favorably with the $246 Lexar Professional 633X 1TB version that's also on sale today.

Although SDXC cards can't be used in your smartphone, many are compatible with most cameras and laptops that can take expandable SD storage.

This is a mind-blowing deal on a true, genuine 1TB microSD card, saving 44% off the suggested retail price. Sandisk chose to cut its price despite having no competition at all, so get it while you can, just make sure your camera or laptop supports it.

The card (officially known as the SDSQXA1-1T00-GN6MA) comes with a lifetime warranty (US-only) and 30 years of cover everywhere else. Sandisk says that it can withstand extreme temperatures and has a built-in write protect to safeguard your content, but there's no detail as to whether it is waterproof, shockproof or X-ray proof.

With a read speed of up to 160MBps and write speeds of 90MBps, the Sandisk 1TB microSD card is compatible with the new V30 speed class and should record videos at 4K without a hitch.

The Sandisk 1TB card still carries a premium (although not that massive) over smaller capacities. For example, the 128GB version retails just under $24, 79% of its per GB price, which translates into a low premium of 20%. And because it is so small, Amazon will also ship it to a number of other territories, including the UK, for an additional fee.

There are several other major players that are currently selling 512GB microSD cards, including the likes of Samsung, Kingston, PNY and Integral - but none have confirmed when they will offer a 1TB version.

For now, Micron and Sandisk are the only other manufacturers to have already announced a 1TB microSD card. We reviewed the 1TB Micron MicroSD card but it still appears to be missing in action when it comes to general availability.