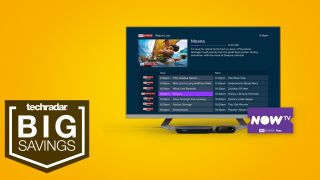 Christmas means one thing: sitting in front of the television with the people you love (well, hopefully) after eating an uncomfortable amount of roast potatoes, and watching films into the wee hours. Now TV's Sky Cinema Pass, which offers a whole host of movies past and present for streaming on demand, has had its price cut in time for this holiday period. You can get six months of movies for £42.99, a big saving on the usual £11.99 per month price.

Now TV points out that the Sky Cinema Pass is the only contract-free way to stream Die Hard this Christmas (cue interminable discussions about whether or not Die Hard is a Christmas movie), so that's one incentive to sign up. But Sky Cinema also has a host of other Christmas offerings, like Scrooged and It's a Wonderful Life, both of which made our list of the best Christmas movies, not to mention a lot of other movies that have nothing to do with the festive period. Here's the deal:

Now TV Sky Cinema 6-Month Pass: £42.99
Save 40% on six months of Now TV's Sky Cinema Pass, which gives you enough blockbusters from past and present to easily fill the holiday season. It's also the place you can watch Die Hard this Christmas. View Deal

Note that once those six months are up, you'll have to pay the standard £11.99 per month fee to keep accessing Sky's range of movies on Now TV. But if you really must stream Die Hard during this holiday period – and you left the DVD in your loft, or something – this is one way to do it.