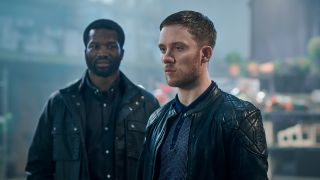 Last night, Sky held a star-studded event called Up Next at the Tate Modern to showcase its programming coming in the next year. Clearly buoyed from the success of last year's Chernobyl, which the broadcasting giant co-produced with HBO, it discussed plans to double its investment in original content by 2024. On top of that, Sky plans to create a massive new production facility in Elstree, just outside of London.

But what about the shows themselves? Sky will have 80 original series in 2020, as well as a "40% boost" to its US content. Sky, of course, is the UK home of HBO and Showtime shows, and it just launched the channel Sky Comedy, which hosts new episodes of great US sitcoms like The Righteous Gemstones and Curb Your Enthusiasm.

In addition to new series of existing shows like Cobra, Brassic and Save Me, Sky put the spotlight on a slew of new series. Below, we've picked out a few of our highlights from what Sky's got coming up in 2020. As is usually the case with Sky's content, you'll also be able to watch these with a Now TV Entertainment Pass, too.

I Hate Suzie is an intriguing drama about an actress (played by Billie Piper) whose popularity is in decline, which coincides with her phone being hacked and a private photo being circulated on the internet. Lucy Prebble, one of the writers of HBO sensation Succession as well as Piper's earlier series Secret Diaries of a Call Girl, is the creator of I Hate Suzie, and each of the eight episodes is themed around a different emotion: shock, denial and fear were three examples Prebble offered at the event. It starts in June 2020.

This felt like the big-budget centrepiece of the evening. In Gangs of London, a gangster boss (Colm Meaney) is assassinated, leaving his son (Joe Cole) to take over the empire and defend its interests from rival gangs. Director Gareth Evans (The Raid) is behind the show, which you might get a sense of during the violent action scenes above. This nine-episode series is coming later in 2020.

Jude Law and Naomie Harris star in this Wicker Man-like drama from Dennis Kelly, the creator of Channel 4 cult hit Utopia, which begins in May. The show is divided into separate three-episode runs called Summer and Winter. The former part sees Jude Law's character head to a strange British island where the inhabitants are determined to keep their traditions safe. Winter, meanwhile, sees Harris's character coming to the same island looking for answers.

A live immersive theatre event themed as an island festival takeover will break up the two halves of the show, which can be watched separately or together.

The Trip to Greece

Michael Winterbottom's semi-improvised comedy series with Steve Coogan and Rob Brydon returns for a fourth and final run on March 3, which sees the duo on an odyssey through Greece. Expect yet more Michael Caine impressions. If you've seen any previous series of The Trip, you'll know what the deal is by now, and whether this style of comedy is your sort of thing (we're big fans of it).

Among Sky's upcoming original comedies, this looked like the highlight. David Schwimmer, who continues to defy age over a decade and a half after Friends ended, stars in this intelligence agency-based sitcom from comedian Nick Mohammed. Every episode lands on Sky and Now TV on February 21. Sky must have some confidence in the show – it announced a series two renewal as part of the event.

Maisie Williams (Game of Thrones) and Sian Clifford (Fleabag) star in this comedy drama about a young woman hunting for her dad's murderer. It's not as heavy-looking as the premise would suggest – Williams plays Kim Stokes, whose mother has kept her far away from civilisation and taught her some extreme methods of survival. It's six episodes long, and coming later in 2020.