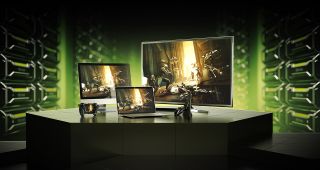 What separates Nvidia’s service from competitors like Google Stadia, PlayStation Now and Microsoft’s upcoming Project xCloud service is that it’s the first service that allows you to stream your own games from Steam, Epic and other services, and play over a thousand other games on-demand.

While Nvidia says the service won’t be able to stream games in 4K right out of the gate like Google Stadia, it says it’s the first service to offer ray traced game streaming - something no other service on the market has - and will lock in games at 60 frames per second.

What that means is you’ll be able to stream games on their highest settings on relatively low-powered hardware - like, for instance, a MacBook Air or a budget Windows laptop you use for work as long as it’s able to meet the minimum specs to run GeForce Now.

Free game-streaming for the masses

You’ll be able to log back in and continue your session where you left off as soon as you hit the hour mark, but Nvidia says it wants to give paying subscribers a chance to log in without having to wait in a server queue.

You don't need to put in a credit card number to sign up - which is a huge advantage for younger gamers who don't have access to one - but those who sign up for the Founders subscription with a card will get the first 90 days free.

Should Stadia be scared?

Yes and no. In some ways, GeForce Now solves a lot of problems plaguing Google's game-streaming streaming service - namely, the lack of games and up-front cost of re-buying games on the service. Being able to bring your own games - at no cost - makes GeForce Now a pretty compelling alternative.

That said, Google has promised a number of new features for the service that could make it more compelling: In 2020 Google says we can expect to see 120 games on the service, some of which won't be available anywhere else. It's going to turn on more of the features it promised at launch - like Google Assistant - and could leverage its YouTube Gaming integration to get streamers on-board.

Google built the juggernaut of game-streaming services and it won't go down without a fight.