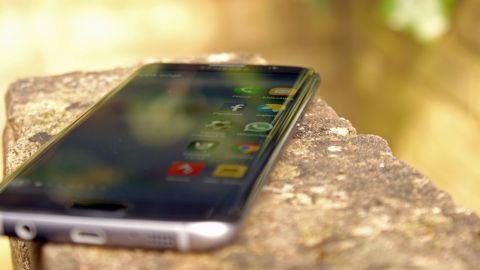 Samsung has given us some of the best-looking smartphones on the market when it comes to display technology, and it's delivered again with the sumptuous curves of the latest Edge. For watching movies it's one of the best phones around.

There's also the effort put in by Samsung's audio engineers over the years to bring the best possible sound quality to the mix on its flagship phones.

I remember the smile I had on my face listening to music on the Galaxy S2 – that was a phone that could only just play higher-power MP3s, but compared to the rest, it was brilliant, with only Apple offering something similar to the mass market.

That heritage has been carried all the way through to the Galaxy S7 Edge – although it's not as necessary any more, which is something I'll come onto in a moment.

And when it comes to gaming, given the amount of power being offered by Samsung's Exynos chip (or the Qualcomm Snapdragon 820 choice in the US) and the gruntiest GPUs alongside, there's a lot to be excited about.

The audio capabilities of the Galaxy S7 Edge are solid. Samsung has always managed to pipe very balanced, stable sound through its headphone jack, with all kinds of audio formats supported.

The Galaxy S7 Edge is also a member of the Hi-Res Audio revolution, although Samsung doesn't make a big deal about it for some reason. You can play back high-end FLAC files on the S7 Edge – and yes, they sound pretty good.

But here's the issue I alluded to earlier: it doesn't matter as much these days if a phone is capable of pumping out incrementally better quality sound. What's arguably more important is whether or not it can play Spotify, or stream internet radio, or how much capacity it has for your millions of MP3s.

Don't get me wrong, it's BRILLIANT that this phone caters for the audiophiles out there, allowing them to download and put on the really high end stuff. Even streaming services (with a decent enough bit-rate) combined with a good pair of headphones will give you a great experience straight into your ears.

But delve into the audio settings on the Galaxy S7 Edge and you're offered a few nice tweaks: UHQ audio upscaling, different equaliser settings, amp-style alternatives to your current sound. They're all present, correct and great to see – although they offer very little in terms of out-and-out improvements to the mix.

The upscaler can only work so much magic to your Spotify streams, and while there is a perceptible difference you have to strain to hear it.

The only thing that's really going to change things for you is Samsung's Adapt Sound feature, something that's too often overlooked. By running a series of bleeps through your headphones the phone can work out where your perceptible hearing range is, meaning it can tailor the sound to be perfect for you.

It really does work, with the difference between the original and upgraded sounds being marked. Check it out if you buy the phone.

In terms of music players, it's clear where the market is going. There's no bundled Samsung player here, so you're forced to use Google Music, which will instantly cajole you into signing up for its subscription service. It's fine – once you skip the screens it'll let you play stored music instantly, but it's a very basic player.

It's telling that hitting 'audio settings' in the app will take you to Samsung's inbuilt controls – a deal was clearly struck to use Google's music player to save bloatware. You can always download one of the reams of free players out there though, so you won't be stuck if you're not a fan of Google's offering.

The Galaxy S7 Edge doesn't add anything radical here – suffice to say everything looks really great and clear on the 5.5-inch screen. Even lower-res streams will still come out clearer thanks to the screen technology, and while the edge display doesn't really add anything technologically, there's something cool about feeling like you're looking at a bezel-less phone in your hand.

Your fingers don't hit the screen when you're watching either, so you can continue to watch unencumbered by the controls popping up and down.

I do think it's a shame that a trick from the Galaxy Note Edge wasn't used again here – the option to have the video controls hidden out of the way on the curved screen at the bottom, although that was more of a novelty than anything else to be fair.

The gaming experience on the Galaxy S7 Edge was one of the best around at launch, but it's not flawless. I've already covered the Game Launcher, and while it does help in lots of ways – getting rid of the alerts during gameplay is something many of us will appreciate – the little Game Tools icon that sits in the corner of the display still seems to get in the way a lot.

Tap-based games see me hitting the icon on occasion and ruining my efforts, which isn't something that seems very intuitive. Yes, you can move it out of the way, but I shouldn't have to, and while you can disable it altogether before you start gaming, sometimes you want the functionality it offers (minimizing games is a big plus, for instance).

I appreciate this is getting a little nit-picky, but I really wanted to explore this new option Samsung has given us, and it's a bit off. It's good that you can drop the frame rate on some of the games to improve performance (and it doesn't even have that much of an effect on higher-powered games, to be honest) but it can slow down some titles oddly.

Overall, gaming performance is slick and smooth on the Galaxy S7 Edge. That's not to say there weren't some times where it got a bit stuttery – when playing Real Racing 3 with 20 cars crashing together on screen at once the performance coughed a little bit. It was hardly worth crying over, but did detract from the experience a little.

On the whole though, you'll find games should look clean and crisp on the screen, taking full advantage of the combination of the higher pixel count and the grunt-filled engine pumping underneath.