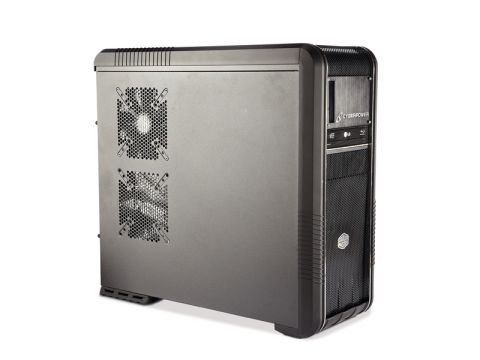 A decent price for a Sandy Bridge E rig, but for serious gaming you're better off spending more on the graphics card than CPU

From the unassuming chassis, you'd be forgiven for thinking the Liquid Xtreme GT was just another mid-range machine from CyberPower. Maybe packing a Core i5 2500K, or a new GTX 560 Ti 448 Core. Or maybe, just maybe, it's a combination of a £500 processor and a £400 graphics card. It's the latter.

CyberPower has dropped the lower-end Sandy Bridge E chip, the Core i7 3930K, into this machine and paired it up with the best single-GPU card currently available, the Nvidia GTX 580. That's around £900 worth of processor and graphics cores, easily covering half the price of this full machine.

The motherboard is an impressive choice too – it's the Asus P9X79 Pro. Thanks to that motherboard choice and the quality water-cooling system on CyberPower's overclocked machines, we've got a CPU happily running at a speedy 4.5GHz. That's 100MHz faster than the chip in the only other Sandy Bridge E machine we've looked at, YOYOTech's £2,499 XDNA Platinum.

The extra £700 you'll pay for the YOYOTech machine seems to only pay for the extra GTX 580 that rig has in its SLI array. That seems like a lot for a card that you can pick up from £390.

Apart from that extra graphics card, the rest of the machine is almost identical. CyberPower has managed to squeeze a little extra speed out of its chip thanks to its chunkier water-cooling setup. It has greater cooling throughput thanks to the fat pipes it uses instead of the smaller, closed-loop ones you get with the Corsair H100 or the Antec Kuhler. The YOYOTech machine may have a sleeker chassis, but the Cooler Master case enclosing the Sandy Bridge E innards is a modern classic.

Still, six months ago the equivalent rig came from DinoPC in the shape of the Core i7 2600K-powered Evolution 2600K OC. That was a £1,800 rig, but the balance between CPU and graphics leant far more heavily towards its pixel-pushing prowess.

The dual-GPU, GTX 590 monolith took up the lion's share of the Evolution 2600K OC's price-tag, where in this Liquid Xtreme GT the money is more focussed on the CPU. That's evidenced in the performance of the two rigs; in games the DinoPC machine with twin GPUs and a 2600K CPU has a massive lead, and in more CPU-heavy applications the six cores of the Core i7 3930K give it the advantage.

In a way this comparison shows how little things have really progressed in the past six to eight months. The best gaming system for the money is built with an overclocked traditional Sandy Bridge chip. All the extra cores in the world can't push the Sandy Bridge E ahead in those terms.

As essentially a server chip though, for heavily multithreaded tasks, the 3930K is a powerhouse. If you're as into your multimedia manipulation as your hardcore gaming, this rig will be a perfect companion. As a focussed gamer, on the other hand, the CPU alone will be the definition of technical overkill.