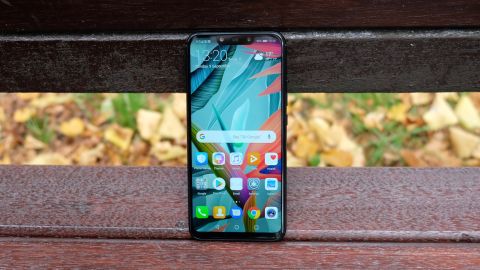 The Huawei Mate 20 Lite is a handsome phablet with an attractive and all-encompassing display and some impressive dual-camera tricks. However, its performance is only alright, and there are some tantalizing alternatives for similar or even less money.

We can expect the forthcoming Huawei Mate 20 Pro to essentially be the Samsung Galaxy Note 9 to the Huawei P20 Pro’s Samsung Galaxy S9. It will be an iterative flagship phablet upgrade.

At the opposite end of the range, the Huawei Mate 20 Lite sits just a screen notch above the Huawei P20 Lite. That latter phone was an attempt to supply a stylish flagship form factor at a mid-range price, and the Mate 20 Lite follows suit.

But does it follow its brother by slipping up on the performance and value stakes, or has Huawei managed to back up those good looks with some serious muscle?

Huawei’s big push with the Mate 20 Lite is the fact that it’s an "AI powered smartphone" like the full-fat Huawei P20 and Huawei P20 Pro, but with a significantly lower price tag.

Before you start imagining a next-level Alexa-like assistant attending to your every whim, the company’s modest AI push mainly operates in conjunction with the camera. We’ll get into the nitty-gritty of camera performance in the relevant section, but the AI enhancements are worth focusing on up front.

Opening the camera app and pointing at a subject, the Huawei Mate 20 Lite will read the scene and adjust to the appropriate setting automatically. If it’s an overcast day, it will decipher this and inform you that it has made the necessary changes. The same applies if you’re indoors, or taking a photo of your dog.

It’s tempting to dismiss this is a simple extension of what digital cameras have been doing for years with their auto settings, adjusting your shots according to surrounding conditions. But the way Huawei’s system actively reads your environment is pretty impressive. It’s not merely a case of responding to some vague light levels.

Another photographic feature that stands out here is the Huawei Mate 20 Lite’s front-facing cameras. They’re unusually pumped-up, to the tune of a super-sharp 24MP sensor and a 2MP secondary lens for depth information. This is the kind of thing you expect to see on the rear of a phone, not the front.

These cameras are put to full use in AR camera mode. Essentially, this is Huawei’s response to Apple’s Animoji - little animated heads that respond to your facial movements.

Where Apple’s approach is largely successful, with the various cartoon heads tracking your facial movements accurately in real time, these are a bit of a mess. There’s a noticeable degree of lag, so when you record animated messages they don’t sync up, while the level of accuracy in the facial mapping simply isn’t up to scratch.

Add in some largely charmless head designs (the default chameleon being the worst offender), and it all amounts to a throw-away gimmick you’re unlikely to use much - if at all.

There’s also a portrait effect that lets you adjust the type of lighting on your face, if you fancy something a little moodier.

A more practical everyday use of those front-facing cameras is Huawei’s face-unlock system. It’s almost certainly not as secure as Apple’s Face ID, but it is fast and accurate. If you’re not a stickler for absolute security, it’s a highly intuitive alternative to fingerprint authentication when it comes to unlocking your phone.

Huawei has continued the design approach it started with the P20 family, with generally pleasing results. The Mate 20 Lite follows the iPhone X way of thinking, with a curvy metal frame sandwiched between twin glass surfaces.

It’s much bigger than the iPhone X, and is more like the new iPhone XS Max. Despite this it’s surprisingly easy to wield and lug around.

That can be put down to a few reasons. One is the edge-to-edge display, which removes a fair amount of the bezel for an 81% screen-to-body ratio. It still has a chin, but it’s pretty inconspicuous.

Another reason the Huawei Mate 20 Lite is so easy to handle is that it’s both skinny and relatively light. It’s just 7.6mm thick, and while 172g makes it a fair bit heavier than the 145g Huawei P20 Lite, it doesn’t really feel that way thanks to its greater surface area.

This is a phone you might want to put in a case, though. The screen edges are very exposed and prone to scuffing and chipping, as we discovered when the phone took the lightest of tumbles from literally a few inches off the ground during our photography process.

Of course, most modern phones have a similarly delicate disposition these days, and we don’t test every handset’s hardiness in this way. But we thought we’d note our experiences anyway.

The Mate 20 Lite’s power and volume buttons are well positioned, though one of them could use a little texture to differentiate it from the other. We have no qualms about the speedy fingerprint scanner’s positioning on the back, though, and it’s also nicely recessed to make it even easier to find.

It’s good to see both NFC and a headphone jack present and accounted for, too. Neither should be worthy of a mention in this way, but sadly both are these days.

You’d expect USB-C in a phone costing more than £300/$400, and Huawei doesn’t disappoint on that front either.

We’ve mentioned the Huawei Mate 20 Lite display’s expansive dimensions, but we haven’t touched upon its quality. And that turns out to be one of the more pleasing parts of the package.

This 6.3-inch IPS LCD is very easy on the eye, with vivid yet reasonably accurate colors. It doesn’t get eye-searingly bright, but it was plenty bright enough for outdoor usage in our experience.

A resolution of 1080 x 2340 might not sound like much in a 6.3-inch display, but we didn’t find ourselves noticing distinct pixels at any point.

Put it this way: we moved directly from a Sony Xperia XZ2 Premium with its 4K HDR display, and it didn’t feel like a massively obvious step down. Let’s be clear that it was a big step down by any analytical metric, but in practical day to day use this screen is more than up to the task.

Part of that is down to the fact that the Mate 20 Lite's display dominates the front of the phone, with a stretched out 19.5:9 aspect ratio. Video content and apps still don’t really make use of this longer form factor, but games will generally fill out if you select the appropriate option when you first start them up.

If not, the display will round off quite pleasingly below the notch. Thanks to the sheer size of the screen this doesn’t feel as restrictive as it does on smaller phones (including the iPhone XS).

Of course, if you opt to hide the notch permanently in the settings menu, you’ll get that slightly off-black contrast either side. That’s inevitable with a non-OLED display such as this, where you simply can’t get the same deep blacks.