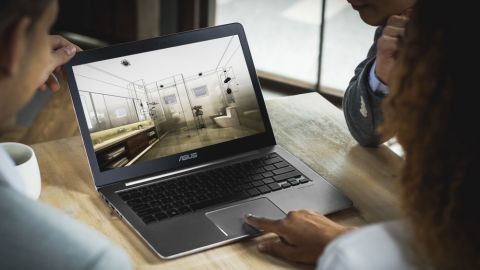 Here’s how the Asus UX310UA performed in our suite of benchmark tests:

Unfortunately, in regards to specs, the Asus ZenBook UX310UA simply isn’t in the same league as the superior Dell XPS 13. At the same time, its price tag is much less than Dell’s flagship, too.

The 3DMark tests are reasonably low seeing as there is no discrete graphics card in there, just an onboard Intel HD Graphics 620. It scraped 4,000 on the Cloud Gate test, meaning it’ll run the odd game from a few years ago. If you’re wanting to play games then you should go for the Zenbook UX310UQ which comes equipped with an NVIDIA GeForce 940MX stashed inside.

Battery life ran at a decent 4 hrs 13 mins on PC Mark’s harsh battery test. It suffered a bit with our film loop test, though, only running 5 hours 24 mins, while the Dell and the HP Spectre x360 claimed to last 7 or 8 hours.

In everyday use we found the battery life adequate. It would last a working day at a push, and longer with more casual use.

Still, we did come across a slight flaw with fan management. Unlike the MacBook Air, the fan is always on. It’s not loud, but it will be obvious in a silent room. Mechanical operations are usually the highest drain on battery life (one of the many reasons CD drives are no longer found in modern portable devices) and it’s strange that Asus has in turn ditched its Fan Xpert software which could have helped in this situation. There is a third-party fan management software out there, but none that are specifically tailored to this machine at the time of this writing. If you do decide to go down that route, please be careful.

The brains powering this laptop is a Kaby Lake Intel Core i5-7200U, and while not top of the range, it’s very adept at word processing and video streaming. Originally a 2.5GHz processor, Asus has it running here at 2.7GHz for an extra boost. It’s paired with an ample 8 GB of DDR4, 2,133MHz RAM upgraded to a humongous 20GB. Specs wise, you’re getting a pretty good deal.

If speed is what’s important to you, we timed it at 4 seconds from opening the lid from sleep to seeing the Windows desktop. A time that means it’s pretty much on par with the MacBook Air’s swift wake-up time. It packs a somewhat small 256GB SSD with no additional drive in the sample we reviewed, which was probably to keep the weight down. There are options available on Asus’s site for an extra hard drive if you need one, however.

And we should mention the speakers: we actually like the Harman Kardon speakers over the Bang & Olufsens found in many Acer laptops.

The sound is fuller, less shrill and more defined. The stereo pair are situated underneath the front which, if placed on a firm surface, will push the sound into it, adding to the warmth of the audio.

It’s not often you mourn the lack of pre-loaded software, but in Asus’s case we really do.

As mentioned earlier, Fan Xpert would have been nice to control the fan noise and keep battery efficiency up. And its Smart Touch software would have helped manage the skittish touchpad.

The Asus Zenbook UX310UA is a more than capable laptop that certainly looks the part with a quality all-aluminium build and graceful design decisions.

It’s much more affordably priced than Dell’s XPS 13, making it affordable for students and budget minded office workers. It also puts it in the MacBook Air’s price range, which is another bonus, especially because it has a better display.

It’s also much more powerful, with an i5-7200U processor and 8GB of RAM. And, while it may not be the lightest laptop in the world, we like how sturdy it is. However, the Asus ZenBook UX310UA is held back a bit from mediocre battery life and a bendy keyboard. None of that is a deal breaker, however.

Apple has most definitely dropped the ball, and while the Asus Zenbook UX310UA isn’t quite in Apple's league, it’s a pretty alternative if you’re not too worried about the unexceptional battery life.