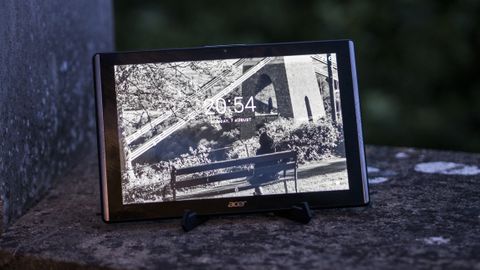 Far from its heyday, the budget Android tablet segment is now mostly dead. The likes of Samsung have all but abandoned their quest to produce an engaging large form-factor device at this price point, in no small part due to the ever-growing popularity of phablets.

But smaller companies such as Acer are keeping the budget Android tablet market on life support, and on the strength of the Acer Iconia One 10 (2017) that’s no bad thing.

For those hold-outs who have older devices that need an upgrade, or those looking for a solid slate for media consumption, the Acer Iconia One 10 (2017) is a safe bet.

It has a strong IPS 1,200 x 1,920 screen, dual loud front-facing speakers and the ability to take advantage of 5GHz AC Wi-Fi - making it a media powerhouse, if not quite on the same level as the Google Pixel C.

The Iconia One 10 (2017) has its fair share of weaknesses. The cameras are both terrible, battery life leaves something to be desired and the design of the device is a little boring – plus the anaemic MediaTek chipset begins to chug when the going gets tough.

These are all things to consider, but at this price the design shouldn’t be a key issue, and if you mostly plan to use it at home battery life needn’t be a major concern either.

Performance remains a problem, but doesn’t hold the Acer back too much as a media machine – so if you’re after such a device on a budget then it’s well worth considering.

However, it’s not the only slate you should consider, as there are a number of other budget contenders, such as the following three.

For less than the price of the Iconia One 10 it also packs 4G connectivity, which is a remarkable deal when all things are considered. Still, it has a smaller battery, a weaker display and the speaker performance doesn't come close to the Acer.

This budget tablet comes with a similar size, a lower price point and a larger battery than the Acer, however that is where the similarities end. The Iconia One 10 (2017) has a stronger screen, design and connectivity and is a better value, even at the relatively high price.

The Amazon Fire HD 10 comes with an 800 x 1,280 screen and the proprietary Fire OS installed. Despite being around the same price, in almost every area it proves to be worse value than the Acer, winning out only in its inclusion of the Alexa smart voice assistant.

Unless you are heavily invested in the Amazon ecosystem, the Acer Iconia One 10 (2017) is the better option.