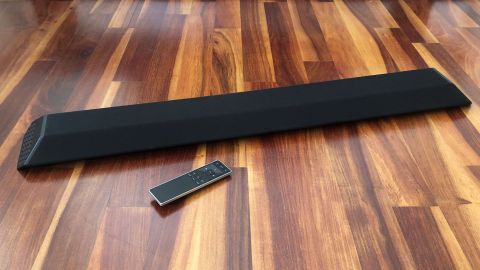 There’s nothing fancy about the SB362An-F6, but it provides good, dramatic sound quality and immersive sound effects for your TV at a really competitive price.

The key feature of the SB362An-F6 – also referred to more helpfully as the “36-inch 2.1 Sound Bar” on most retailer's websites – is really its sheer value for money, costing just £149 in the UK and an even more competitive $139 in the US, where it was launched at the end of last year.

Readers in the UK may not be very familiar with Vizio, although it currently claims to be the no.1 brand for soundbars and the no.2 brand for televisions in the US. The company recently launched into the UK for the first time, and if its SB362An-F6 soundbar is anything to go by then Vizio should make a bit of a splash on this side of the pond as well.

Despite the bargain-basement price, the SB362An-F6 is neatly designed, measuring 36 inches wide, and a streamlined 2 inches high, and 5.2 inches deep (914xx52x133mm). It will sit comfortably underneath the screen of most TVs, and Vizio also includes a pair of wall-mount brackets as well.

There are some money-saving compromises here in the design, though, such as the lack of an LCD display to indicate different sources and audio modes, and the reliance on a confusing series of blinking lights to indicate input.

The included remote control has buttons for treble, bass, Bluetooth input, and the DTS Virtual:X technology, along with the usual playback and volume controls, however there’s a set of control buttons on the right-hand end of the soundbar.

Inside the main unit, the soundbar houses four main drivers, with a pair of 2.6-inch (67.8mm) full-range woofers and two 3.0-inch (76.2mm) sub-woofers, although the sub-woofers get extra backup from two passive radiators that help to add even more bass rumble. Some people might prefer separate tweeters to handle voices and higher frequencies – especially if you want to use the soundbar for listening to music as well – but the low cost of the SB362An-F6 means there has to be a trade-off here.

Any soundbar is, of course, primarily intended for use with a television set, and the dedicated sub-woofer is probably the better choice for enhancing sound effects from the latest Hollywood blockbusters

Looking at the base of the soundbar reveals another conspicuous omission too: The SB362An-F6 includes both optical and 3.5mm analogue audio inputs – with the relevant cables all helpfully included in the box – as well as a USB port for playing music stored on a memory stick or hard drive (but only WAV and MP3 formats), however, there’s no HDMI interface on the SB362An-F6 at all, let alone the more versatile HDMI ARC. This meant we had to connect our Apple TV 4K to our Samsung TV via HDMI, and then use the TV’s optical output to connect it to the SB362An-F6.

But that’s a minor complaint at this price, and perhaps Vizio preferred to spend its limited budget on providing support for Dolby Audio and DTS Virtual:X for film soundtracks. The Virtual:X technology is particularly welcome, as it attempts to provide virtual surroundsound effects without the additional – and more expensive – hardware required to support Dolby Atmos as we saw with Vizio’s Atmos-on-a-budget SB36512 soundbar.

Saddened by the recent death of Rutger Hauer, we turned to the 2007 ‘Final Cut’ of Blade Runner. The built-in sub-woofer and Virtual:X support make an impact right from the start, with the deep, dramatic opening notes of that famous Vangelis score striking like the bells of doom. Without the Virtual:X effect the sound quality is good, but the sound feels quite static, focused on a relatively limited sweet-spot in front of the soundbar. However, turning Virtual: X on allows the sound to expand and reach out across the room, as the light electronic chimes hang gently in the air.

As the credits fade and the camera pans across the neon-lit skyline of Los Angeles – and we're surprised to be reminded that Blade Runner is set in 2019 – the flares and explosions that fill the sky have a real sense of weight and depth behind them.

There’s an impressive sense of movement too, revealed by the flying jet-car that zooms towards the viewer in that opening scene. Initially, with Virtual:X turned off, the sound of the jet-car’s engine moves towards me and then quickly fades away, but rewinding a few seconds and selecting Virtual:X adds depth and timbre to the sound of the engine, and creates a more realistic sense of movement as the sound approaches and seems to pass by on your left-hand side.

And, of course, there’s that heart-rending scene as Rutger Hauer’s replicant faces his death, intoning – “I’ve seen things you people wouldn’t believe”. The SB362An-F6 really draws you into the moment as it captures the atmospheric sound of the rain drops falling from the skies, and the rumbling drums that once more evoke a sense of doom (“time to die…”).

After a performance like that it seems churlish to find fault with the SB362An-F6, but the soundbar does have a few little rough edges: Those passive radiators sometimes get a little carried away, exaggerating the bass rumble rather than keeping it taut and precise. And, switching to Bluetooth to stream some music from a Tidal account, the lack of tweeters reveals a weakness on some of those high-pitched Queen harmonies on Somebody To Love. It’s handy to have that Bluetooth option, though, and the SB362An-F6 will be fine for just listening to a few tunes when you’re collapsed on the sofa during the summer heatwave.

The SB362An-F6 isn’t perfect, but its dramatic and imposing sound provides a real audio upgrade for your television’s built-in speakers. The Virtual:X technology works well too, helping to create a more immersive atmosphere while you’re watching. And while it might be missing a few bells and whistles, there’s no doubt that the SB362An-F6 provides excellent value for money.