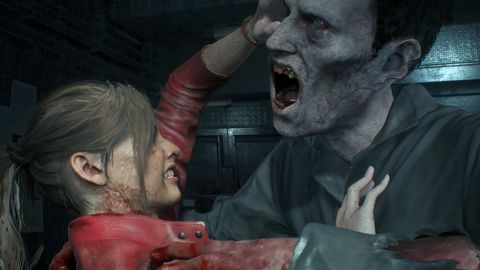 Resident Evil 2 elevates the grandeur of the original game into a masterful modern survival horror experience. Its finely detailed and gorgeous environment demands exploration, as long as you’ve got the stomach for it.

Relative to the games original release date, there is a palatable 90s vibe to Resident Evil 2. From the font that punctuates adverts in supermarket windows to the sickly corporate Umbrella billboards, Raccoon City feels firmly pre-Millenium. Leon and Claire wrangle with plasticky portable safes, signal modulators and cranks to solve puzzles. The detailed paraphernalia ends up being what makes every room so compelling in this labyrinthian remake of the 1998 classic, which is an important factor given that you are encouraged to retrace your tracks multiple times.

If their record with this series belies anything, its that Capcom understands how to curate a claustrophobic environment that is deeply interesting to explore. The Arklay Mansion is oppressive but full of engrossing secrets that keep you pushing forward, and Raccoon City Police Station is no different. It feels like a victory lap in environment design, a Herculean effort where no one room lacks some kind of interesting flavor.

Less is more, and whilst the game’s few defining zones don’t match up geographically with the open world expectations of the last decade, it never suffers for it due to this eye for detail. Terrifying highlights include Chief Iron’s deeply unsettling office space, an encroaching room lined with his trophy collections and subsequent notes on each animal, in which he describes an almost sexual obsession with taxidermy. Viscera-lined sewage pools and electricity-starved hallways also make their mark. In the latter, you’re left helpless and begging for the fluorescent tube lighting to stop flickering and tormenting you, praying for a solid blast of light to reveal the Licker you are constantly convinced is waiting patiently on the ceiling just in front of you.

Resident Evil 2 feels like it's being controlled by an omniscient director, a nefarious George Romero ready to make your skin crawl and your mouth hurl… expletives at the TV. At multiple points we found ourselves in a deep sense of shock thanks to clever jump scares that never felt trite. We were caught out and tricked, simple as that. Resident Evil 2 always feels one step ahead of you, and will tinker with what you think you know about your environment to meddle with your psyche.

Returning to rooms in different scenarios or even in the same playthrough can offer up electrifying surprises (ones that we won’t spoil) where the choices are adapt or die. These flash points seriously benefit the atmosphere, but the more blood-pumping pervading aspect is the constant cat and mouse chase you face with the Tyrant, an invincible apex predator that is always breathing down your neck.

You might think you have his number eventually, but when the intense musical cues surge and he slams open a door revealing his stoic, towering self you will instantly be filled with fear. The Tyrant doesn’t care where you are or what you’re doing, or even in some cases whether the room you’re in has an easy escape route. The game demands that you think on your feet and put the Tyrant to the back of your mind until you need to deal with this invincible foe.

This is a constant concern that is offset perfectly by the rewarding exploration and difficult puzzles in Resident Evil 2. There are numerous secrets in this game that can make or break a playthrough, and the quicker you figure them out the faster your runs through will be. It’s almost like an adventure game, where you’re taking items out of a certain context and reimagining them in another, and Resident Evil 2 offers bursts of endorphins every time you stumble upon such a eureka moment.

Yet, take too long exploring and the Tyrant’s footsteps will be close by, forcing you to double down or bolt. Your first playthrough should take you around six hours and this will only get quicker as you play through the six different scenarios available to you once you’ve unlocked everything. It’s a fantastic amount of content for the price point and due to the ranking system it’s endlessly replayable, as long as you enjoy the addicting feedback loop.

Tidying up with Leon Kennedy

Aside from, you know, the zombie infestation, the invincible super mutant and the government conspiracy, inventory management is your fourth plate to spin as you rifle through the police department. Space is incredibly limited in Resident Evil 2, and you’ll have to focus on seeking out hip pouches if you want to master inventory-heavy puzzles and keep enough rations to stay alive.

This might frustrate series newcomers, but it's not so off putting as the original games, and forces a style of play that makes playing Resident Evil 2 even more fun. You have to think like Marie Kondo. Does this flash grenade spark joy? You will make these decisions and quickly regret them when you’re sidelined by a venus flytrap zombie in the next room, which is an instant kill if you’re not carrying a sub weapon.

Speaking of weapons, the gunplay in Resident Evil 2 is brilliant, and weapons feel crunchy, especially when they’re eviscerating the cranium of an infected beast. Zombies are more spongy than usual, meaning they take at least three bullets or more to land on their back, never mind kill them. This is far better than other series iterations, as it means you’re in danger at all times. No matter the ability or aesthetic of the zombie, it can and will put an end to you if you aren’t switched on.

In regards to the story, this is the only aspect in which Resident Evil 2 feels held back by the original game. It’s wholesome good fun, but when you consider the more cinematic, nuanced narrative offerings of modern games you can see that it struggles to compete. The original has the story of a B-movie, and whilst the updates in the remake make it passable and charming, it feels like the least of your worries as you make your way through the game.

Weirdly enough, we left Resident Evil 2 far more keen on Claire’s side of the story compared to Leon’s, which feels contrived and devoid of emotion. This dissonance is mostly due to the use of Claire as an impromptu guardian for endearing youngster Sherry Birkin as she is cajoled by various forces throughout the events of the game.

This means that when you reach the crescendo it feels like there’s something to fight for. Claire’s story also plays host to the better boss fights in Resident Evil 2. Leon’s side of the events are still tons of fun to play, but the voice actor's performance and the writing feels a bit muted in comparison to Claire’s, with corny lines like “hope I don’t have to write a report on this” thrown in amidst the chaos. It’s certainly not comparable to that of his doppelgänger, a young Leonardo DiCaprio.

Between the six scenarios in the game there are some significant changes to keep things fresh, but nothing is too drastic that it throws you off completely. This is a calculated and clever decision from the developers to make the game as addicting and replayable as possible.

Your muscle memory and paper notes from previous playthroughs will certainly come in handy, but you can never fully predict what’s coming next, even if you take the same route. We imagine speedrunners are going to have a field day with this game, if it hasn’t already given us the bug.

We wrapped up our latest playthrough in just under three hours, but we’re still lying awake at night thinking about how we could sand off the edges. Such is testament to the excellence of Resident Evil 2’s design. It’s a hell of a drug, and it has something bold to offer survival horror fans looking for a change of pace.

Whilst it can't quite escape the trappings of the original game's story, it makes wonderful homage to it that nostalgic die-hard fans will love, and does its best to curate a cinematic experience for newcomers in the stunning RE Engine.

Yet, all of this is ancillary to the utterly fascinating environment design that litters the walls and floors of Resident Evil 2’s toybox playspace. Even when you think you’ve got it all figured out, the developer is ready with another secret sucker punch to keep you craving just one more run. It’s an utter triumph for the series, a game oozing with passion and respect for the source material that makes clever innovations where necessary without damaging the original vision.

It proves that when Resident Evil 2 released back in 1998, the core elements in its DNA were timeless. This remake understands this but injects the source material with just enough genius to make it perfectly palatable for a modern audience, placing a brilliant game back into the hands of a new generation who more than deserve to catch up.