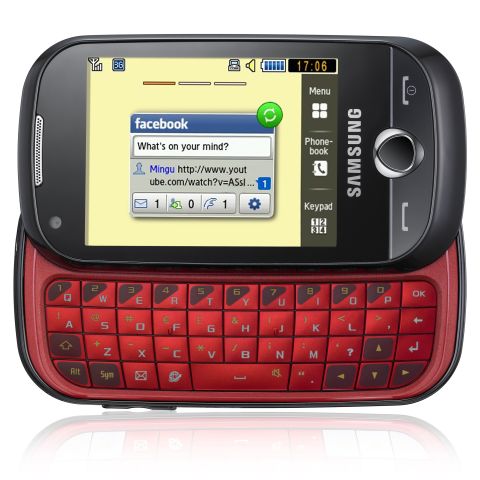 A slick, affordable handset that offers a wide range of functionality and customisation.

Samsung has fused elements of both the Genio Touch and the Genio QWERTY to come up with a hybrid device – the Genio Slide.

The Samsung Genio Slide combines a 2.8-inch touchscreen display and a slide-out QWERTY keyboard, and sports the colourful swappable back panels and youth-targeted features – with an emphasis on social networking – that mark the previous Genio models.

However, the Genio Slide packs a far more powerful feature punch than its Genio mates – and consequently has much wider appeal.

Unlike its predecessors, the Genio Slide is a 3G-enabled handset, with high-speed HSDPA mobile data support (up to 7.2Mbps) and Wi-Fi connectivity built in.

It also has A-GPS satellite-based location finding onboard.

Cranking up the downloading and uploading speeds opens up the Genio Slide's potential for a quicker and more enjoyable online media experience than the EDGE/GPRS-only Genio Touch and Genio QWERTY.

For instance, as well as faster applications such as Facebook, Bebo and MySpace, in the UK the Genio Slide comes with a BBC iPlayer app already installed, offering live and catch-up TV and radio programmes.

It also has pre-loaded links to mobile TV streaming services.

Onboard 3G also allows for video calling on this model, with a front-facing camera complementing the main 3.2-megapixel camera on the back of the phone.

In addition, Samsung aims to keep mobile music listeners happy by providing a standard 3.5mm headphone socket on top of the bodywork.

The review sample we tested also arrived with a 2GB MicroSD card included in the box, and memory cards up to 16GB are supported.

Initially, the Samsung Genio Slide is debuting in the UK for free on contract deals and £120 on pay as you go, where it's currently being offered by Vodafone and Tesco Mobile.