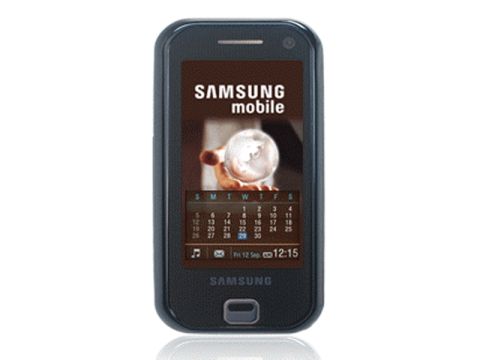 On the whole, Samsung has tended to steer clear of touchscreen mobiles – and it shows

A nifty little handset with lots of potential, but unfortunately its poor usability lets it down

The term 'iPhone killer' is growing a little wearied, and while Samsung's F700 may look like Apple's debut handset – it's more of a sheep in wolf's clothing. That said, Samsung does have a few aces at the ready to convince us to stop coveting the iPhone, not least the presence of an actual keyboard and 3G HSDPA connectivity. But whether that's enough to beat the power of the mighty Jobs’ juggernaut is another matter.

First impressions are encouraging. The device is sufficiently Knightrider-esque to warrant the attention of floating voters, with a sleek black casing that unfortunately displays greasy paw prints to the full. Like the iPhone and subsequent spree of touchscreen handsets from the likes of LG and HTC, the F700 is dominated by its full-sized screen on the front.

A little bit extra round the middle is evident on account of Samsung's inclusion of a slide-out keyboard – a masterstroke for emailers not fully embracing of the fad for touchscreens. And there's no squeezing multiple letters on keys, either; instead, you're presented with an uncompromised and very usable QWERTY keyboard.

On the whole, Samsung has tended to steer clear of touchscreen mobiles – and it shows. The newly developed Croix user interface of the F700 is the handset's main stumbling block. Not enough thought has gone into the nitty gritty of what employing touchscreen technology really means for the user, and rather than adapt its menu system ready for the rigours of finger pressing, Samsung seems to have merely imported its standard UI wholesale with a few tweaks.

The touchscreen itself is responsive enough and comes with VibeTonz technology providing a mini vibrate alert to let you know when a 'button' has been successfully selected. However, simple functions like accessing your phonebook and even hanging up can be needlessly troublesome – and somewhat embarrassing if you're leaving a voicemail message that ends up being three minutes of you frantically pressing various parts of the screen.

Getting used to the menu's idiosyncrasies is half the battle with the F700, and where Apple basks in the glory of simplicity, Samsung merely frustrates with complexity – no doubt with the best of intentions. The standby screen is littered with touch-button options including call manager, main menu, an alpha-numeric select key, time, calendar and central hot-zone to take you to the shortcuts menu. Suffice to say this leaves the distinct possibility that, like a drunken Saturday night out, you'll end up somewhere you didn't mean to be.

An additional manual button beneath the screen will also take you to the shortcuts menu, which has quick links to the music player, web browser, messaging and phone functions (bringing up a touchscreen keypad with the option of making a voice call or 3G video call using the VGA camera).

As well as 3G, one of the big pluses of the F700 is its support for HSDPA allowing still-faster data transfer rates for things like downloading music and video, and watching mobile TV (also on offer) – making the iPhone's mere EDGE capabilities cower in the corner.

An area it won't be challenging in, though, is the music player, which is basic and lacking inspiration. There's no equaliser option, and once again the controls aren't as straightforward as they could be. But the proof is in the listening, and the F700 pulls it out of the bag with a good quality loudspeaker and similarly enjoyable experience via the headphones. Support for A2DP Bluetooth means you can always go for a wireless set instead.

As well as a VGA camera for video calls, there's also a 3-megapixel camera with autofocus. Like many of Samsung's previous outings, the megapixel-count can be deceptive, as the slow autofocus tends to result in slightly blurred pictures with a greater degree of grain than other similarly specced cameraphones. There's also no flash, but the LED photo light does improve low-light shots.

An area where the Korean manufacturer has always shone is in the call-quality department, and again the F700 excels with crystal clear audio and consistently good reception. Likewise the battery performance is good, lasting over two days with fairly heavy usage. This will vary depending on the use of 3G and HSDPA, but you shouldn't find yourself cursing the fact you've left your charger at home too often.

You've got to admire Samsung for constantly challenging technological boundaries, but sometimes you get the feeling that its keenness to evolve hinders the final product. All too often it stops short of achieving its potential because of an over-excitement to include too much.

In the F700's case, it’s the user interface that proves its downfall. The handset itself is well designed, with one of the most accessible keyboards we've seen, and the inclusion of HSDPA is much more forward-thinking than Apple. But ultimately in use it's frustrating as hell, and unfortunately for Samsung that's what counts.