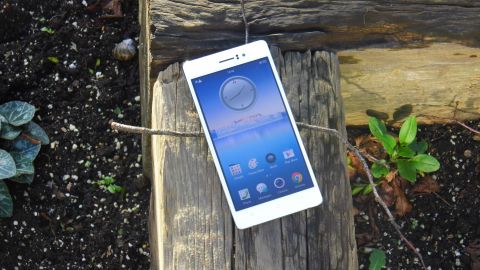 High five for the R5

The Oppo R5 may be one of the thinnest smartphones available on the market, but it also packs in a raft of features that make it worth another look, if you can find it.

I can already hear many of you ask "but who is Oppo?"

Chinese mobile manufacturers are booming. The phrase "made in china" might have become synonymous with "mass produced", "cheap", and "low quality", but we've already seen with the OnePlus One that these relatively unknown OEMs (in the West at least) mean to take the world by storm.

Similar to its Chinese rivals, the Oppo R5 shames the established flagships with its low price tag, found online at around £290, $460, AU$600.

You'll be forgiven for thinking that with briefly having the "world's thinnest smartphone" title and a super low price tag under its belt that Oppo has had to make some sacrifices in terms of performance, but this isn't the case.

This technically makes the OnePlus One more powerful, but its thinner, edgier design will certainly help the Oppo R5 stand out a little more.

From the front the R5 looks a lot like your stereotypical smartphone, albeit one that takes a few design cues from a certain Cupertino based brand. A thick bezel at the top and bottom, with thin strips down the side of the screen are the first clue that Oppo has looked towards Apple's design success.

The iPhone's influence is also very noticeable from behind, steam roller an iPhone 5S and you will get a strikingly similar look. Oppo even offer the R5 in a white and gold combination, again appearing to copy Apple.

The Oppo R5 is by no means an unattractive handset, but its extreme diet is the only thing to shout about here. Within a case that thinness will be easily overlooked, and without it the R5 felt a little too thin.

Industrially square edges dig into the fingers slightly making it harder to grip the 148.9 x 74.5 x 4.85 mm frame, the HTC One M9 with its curved chassis is far more comfortable and easier to hold.

Oppo has opted for a minimalist design with the R5; the front is adorned with capacitive Android buttons, the 5MP front camera, speaker and sensors while the back houses the camera and LED flash tucked in the upper left.

Physical keys are limited to the volume rocker and power/lock key on the right hand side, and the microUSB port sits at the base. A microSIM tray sits on the bottom left corner, accessed with the supplied poking tool.

Undoubtedly because of size constraints there is no headphone port. Instead Oppo R5 users will have to rely upon a supplied microUSB adapter. Over a typical two year period, I can see this adaptor being easily lost or broken, which will only lead to frustration further down the line.