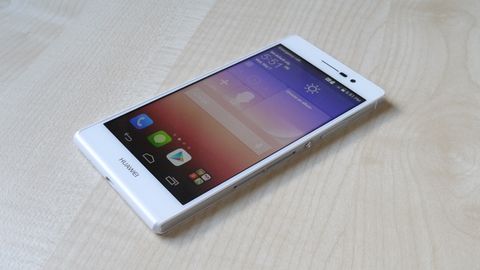 A flagship for Huawei, but not for the market

An uninspiring homage to all phones that came before it, saved by a stonking front cam for the "selfie" crowd and an unbelievably light body.

Huawei talked it up big time at the launch event for the Ascend P7, suggesting its newest phone is a premium model that's lighter, thinner, faster, better and more exciting than the thin/light/fast/good high-end smartphones offered by the more established competition.

Actual contract costs and a UK, US and Australia street prices are yet to be set for the P7, but that relatively high official unlocked price tag sets up Huawei for a fight with the likes of Apple, HTC, Samsung and Sony for the flagship smartphone connoisseur cash.

Huawei's offering a 5-inch display running at the full HD resolution of 1080 x 1920, with the in-house (not-Qualcomm) 1.8GHz quad-core processor running things down in the boiler room beside the same 2GB of RAM we see in most of today's top-drawer smartphones - and 4G LTE support for use with speedy SIMs.

Huawei's been pretty bold with its Android customisations once again, sticking its Emotion UI on top of the Ascend P7's Android 4.4.2 KitKat software, a system that removes the standard Android app drawer and replaces it with an iOS-style emphasis on the Home screen.

Huawei's also trying to appropriate the word "selfie" as its own, stuffing an 8MP front-facing camera into the Ascend P7 for the ultimate in self wrinkle capture, combining this with a 13MP main sensor supplied by Sony around the back.

Many Android users will be happy to see a microSD card slot on the side of the P7 to boost its theoretical maximum 16GB of built-in memory. Plus with a weight of just 124g and a thickness of 6.5mm, it's a slimmer contender than the chunkier HTC One M8 and Samsung Galaxy S5.

It all looks pretty good on paper, but the Ascend P6 also promised a lot last year, with the lack of any standout features dooming it to consumer obscurity. Is the Huawei Ascend P7 more exciting?

The Ascend P7 is a relatively middle-of-the-road smartphone with little in the way of initial wow factor when you first remove it from its high-end cardboard box.

Yes, it's thin, with a metallic banded edge that's extremely reminiscent of the sort of design feature Apple introduced to the world with the iPhone 4.

Huawei's tried to make a thing out of the fact that it has a rounded bottom just there beneath the screen, but it's hardly the sort of feature that stands out as a design statement in the hand.

What's nice to see is that the hardware layout has been jiggled around since the launch of last year's anti-climactic Ascend P6. The P7 now has its USB connector at the bottom of the device, making it much easier to hold the thing in front of your face when it's plugged in and charging.

The headphone socket has also been shifted, now sitting right at the top of the phone instead of the ridiculous side placement Huawei employed with the previous P6.

These tweaks alone make it a much more usable phone on a physical level, plus the lightness of the Ascend P7 and the slim bezel makes it feel substantially smaller in the hand than the likes of the Nexus 5 or chunky Xperia Z2.

There's a bespoke little pin in the box, for users to poke-eject the microSIM and SD card trays from their docks. Huawei suggested there was dual-SIM capability in the Ascend P7 at its launch, with a second SIM supposedly able to sit in the SD card slot if you value connectivity over storage space.

But this feature wasn't available for us, as there was no way to get a second SIM - micro or nano - securely in place. We suspect there's a low-profile dual-SIM hardware version out there in other countries, as this variant of the P7 only allows one SIM to be used.

Power and volume button placement is a bit fiddly. They're very close together, making it hard to automatically make your thumb gravitate to one or the other without thinking.

It'd be nice if the power button poked out a little further, as that'd give your fingertips more of a clue that they're about to poke the right thing.

The back is definitely quite pretty. One piece of glass covers a spangly mesh effect back, where a Huawei logo proudly sits. But like the original version of the Nexus 4, this glass back is very slippery.

Put it down on anything other than a 100 percent flat surface and the P7 will slide off it, as there's no protruding plastic or rubber surround to give the glassy rear any grip.

As slim and pretty as it is, a chunky cheap leather-effect case may well be needed if you have ideas of nursing the P7 through a two-year contract.

Still, I dropped it twice, once a good 18 inches onto concrete, and it didn't break, so there must be some good being done by the metallic band and the 1mm or so of plastic that sits between it and the glass front and rear.