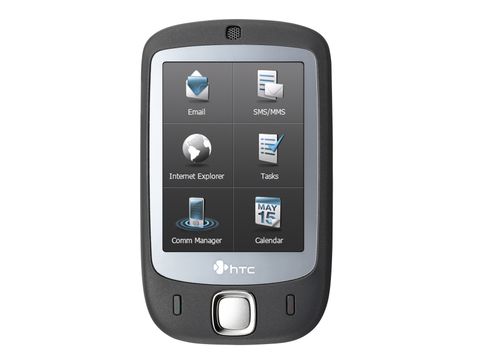 With the HTC Touch, HTC has introduced a user-friendly interface layered over the standard Windows Mobile navigation system

A strong all-rounder that delivers fashion-sense, functionality and innovation

Much as we'd like to avoid making the obvious comparison, you can't help but notice the similarities between the new HTC Touch and the iPhone.

Apple's first ever mobile may still be some way off arriving in the UK, but blaze of publicity and blog speculation continues to outburn other gadgets. Will its unusual interface spark a revolution in mobile phone design, in the same way as the iPod revolutionised MP3 players?

Look at the HTC Touch, and there is no doubt that the revolution has already begun. Like the iPhone, this mobile has been designed to be perated using a touch-sensitive screen and the tips of your fingers.

Despite the interface, however, this is not really another me-too product. Despite not having the built-in hardware of the iPhone, this is in some ways a more serious phone. In fact, even though it does not have a built-in typewriter keyboard, the HTC Touch features a fully-fledged Windows Mobile palmtop computing system.

It has all the features that you would therefore expect from a Microsoft-powered business smartphone but offers a design, handling and a user experience that have changed almost beyond recognition.

Stripping away the Qwerty keyboard and numberpad leave you with a device that is so neat and small you can't help but be impressed. But of course this is not just a PDA, it is also a fully-fledged multimedia device with internet browsing, 2-megapixel camera - and mobile phone connectivity.

What makes the Touch different from other touch-controlled phones and PDAs past and present is that you it has been designed so that you are far less dependent on the supplied stylus.

You still use the pen control for inputting text using the virtual keyboard, and to access the deeper functions of the Windows Mobile operating system, and the software that you have loaded onto it. But the 2.8-inch TouchFlo screen has been engineered so that your finger can access and control many of the functions without having to draw the stylus from its sheath.

The phone uses the latest Windows Mobile 6 Professional version of the operating system, which supports features such as push email and HTML email, amongst numerous other upgrades from version 5.0. But the home screen is rather more attractive and user-friendly than on a normal Windows Mobile device.

The Today screen is customised with a giant digital clock, which can be quickly substituted for a widget that will tell you the weather for today and for the next five days.

You can access the standard Microsoft start button from these displays, as well as see what messages and appointments you have waiting for you. But all these require the stylus if you want more detail...

However, run your finger upwards from just below the bottom of the screen and the display changes completely. The LCD is simplified into six squares, each offering a touch button to access, the web, email, SMS, tasks, calendar or the communications manager utility.

Run your finger across sideways and you then toggle through other screens that can be operated with a single digit. One is the dialer, which provides large buttons to access favourite phone numbers - each of which can be customised with a suitable photo or avatar.

If you want to delve deeper into your phone book, you can use your finger to "pull down" the display, allowing you to scroll with your finger; separate dial button can then be used to actually call the number. A final finger-friendly screen gives you quick access to music, photos and videos.

The interface does take a bit of getting used to - but it is well worth it. The onscreen typewriter, for instance, is much faster to type with than with a numberpad, and is probably almost as quick to use as a miniature physical Qwerty keypad.

What's more a predictive dictionary means that the device continually guesses the word you are trying to type. So by poking the stylus on the correct guess you can often save yourself time and effort.

There is no handwriting recognition system supplied, but this is a feature that may well be offered by third-party software developers; the excellent Notes application that is supplied allow you to mix written notes and doodles with type and sound recordings.

The screen, as with any non-flip mobile, is going to be prone to scratching but HTC provide a pouch case so that you can avoid unnecessary wear and tear.

Onboard memory is restricted to 64MB of RAM, and 128MB of RAM. But although there isn't the gigabytes of storage that will be available with the iPhone, you can upgrade capacity easily enough using MicroSD cards.

These can be changed without powering down the phone - but it is a slightly fiddly operation involving taking the battery cover off, and slipping open a secret side panel that also reveals the slot for the SIM card.

Like the iPhone, the HTC Touch makes the brave decision to make do without 3G connectivity, opting instead to offer high-speed data connectivity using Wi-Fi alone. In our tests it hooked up to our home WLAN with no difficulty.

The web browser is the familiar pocket version of Internet Explorer, but what makes surfing more fun than on some smartphones is the ease with which you can rotate the display to get the conventional landscape-shaped screen.

Windows Media Player, meanwhile, does the honours when playing video and audio. A good number of audio formats are supported including MP3. Music played through the speakerphone is OK, but not particularly captivating.

The headset is much more proficient and conveying the sound in a sympathetic tone, but the lack of equaliser adjustments will not please some listeners. A USB connector is used for the headset, so upgrading the earbuds is not as straightforward as on some rival devices.

The camera is pretty average affair. The 2-megapixel stills capture has a reasonable range of manual overrides available, but the more demanding user will gripe about the lack of focus control, and the absence of a serious close-up facility.

There is no flash, but lowlight images taken with the device are surprisingly good, with minimal noise and excellent exposure.

Outdoors, exposure is also commendable; this is one of the very few cameraphones that refuses to burn out the highlights even in the harshest of lighting conditions. Unfortunately, the colour is not quite up to such high standards, and picture quality overall is only just better than average.

Unlike many smartphones, the HTC Touch will not only allow you to read Word and Excel documents, it will also let you author them and edit them too. You also get a stripped down version of PowerPoint for viewing presentations. Other bundled document readers include utilities accessing PDF files and for decompressing ZIP files.

Measuring 100 x 58 x 14mm and weighing just 112g, the really impressive thing about the HTC Touch is its size.

This is a powerful palmtop computer but without the bulk its rivals. We are sure that many serious users will love the Touch. And, of course, if you really need a typewriter keyboard, you can also connect one using Bluetooth.

We suspect, however, the HTC Touch will appeal to people because of its fashion sense as much as through its functionality.

It may not have the same amount of style as the Prada Phone by LG, but it is far more sophisticated in appearance and more tactile than your average BlackBerry or Pocket PC device. And its innovative interface make it a much more appealing proposition for everyday use as a touch-controlled mobile.