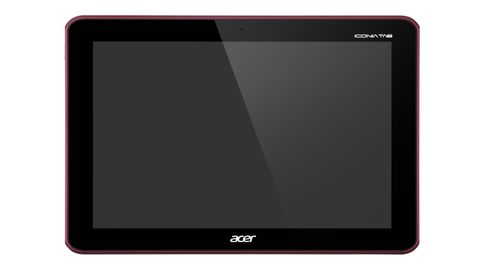 It's no secret that the Acer Iconia Tab A200 is being marketed as a media device, and the screen is suitably sharp, with a 1280 x 800 pixel resolution that means you can sit back and enjoy some 1080p visuals on the move.

Although we found detail to be crisp, there was a definite lack of brightness when compared to top-end Android tablets such as the Samsung Galaxy Tab 10.1 and the Asus Transformer Prime.

The Acer Iconia Tab A200 comes pre-installed with Clear-fi - Acer's universal media player that ships on all laptops and tablets. The program enables you to quickly access your movies, music and pictures all with an attractive white sand background image.

Unfortunately, we found the program to be a bit on the clunky side. If you tap the sidebar, you're given the option to view your media in a timeline, or search through your catalogue, but the experience is slow.

In contrast, using Astro file manager, which also comes pre-loaded on the Acer Iconia Tab A200, was a breeze. Folders loaded up quickly and navigating through the interface was smoother than using the Clear-fi app.

Given the measly 8GB of onboard storage (although US users can, as we mentioned before, buy a 16GB version for just $20 more), you'll need to invest in a microSD card to start loading the Acer Iconia Tab A200 full of media.

Once completed, you can play your media either through Clear-fi, which uses the standard Android player, or download a different player from the Google Play store.

The Android player has no trouble with MP4 and AVI files, but for other formats such as MKV or MOV, you'll need to install additional codecs.

Playback is smooth for the most part, although we loaded up a 1080p MKV clip of The Dark Knight and the result was difficult to watch. The playback was jerky and staggered and, although the visuals were well rendered, the Acer Iconia Tab A200 couldn't keep the footage fluid.

Acer hasn't included any way to buy or rent movies any other way than through the Google Play store, which isn't a big cause for concern given how many films are constantly added to the Android service.

The Acer Iconia Tab A200 isn't a good choice as an ebook reader. While there's no problem with the screen, the difficulty comes from the hefty body and the 715g weight of the tablet itself. It makes holding it one-handed a real workout, and although possible, it's not entirely comfortable to read on for a long time.

But if you do like reading and weightlifting at the same time, then the Acer Iconia Tab A200 comes pre-loaded with the LumiRead ebook app, which supports ePub, PDF and TXT formats, and will catalogue your tomes for you.

You can also tap the book store icon in the title bar to open the book store and download texts directly to the tablet. In the UK, the only book store on offer is LumiRead's own store, with a selection that can't compete with Amazon's virtual library.

Music on the Acer Iconia Tab A200 suffers somewhat from the lack of volume produced by the speakers. It's not quite enough to really fill a room, so you'll be doing most of your listening through headphones.

Clear-fi uses the album covers as big friendly buttons in its cataloguing UI, and there's the option to search through your entire collection quickly using the pop-out sidebar.

As expected, all the usual audio file formats - MP3, M4A, OGG, ACC - are supported here, and there's also the inclusion of Aupeo - a radio app that, while not as attractive as TuneIn Radio, isn't a bad way to enjoy music from this tablet.