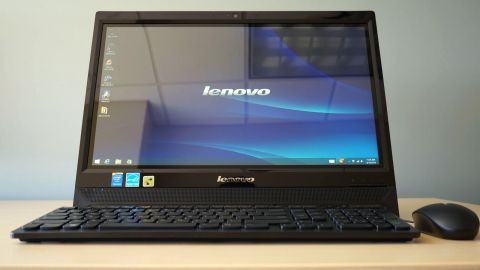 This Lenovo C260 can handle most everyday tasks, but don't expect too much more from this budget-end all-in-one PC.

If there are two things to be said about the Lenovo C260 Touch, it's that it's inexpensive and space-saving. But beyond that, there's not much else to say about this all-in-one PC. Priced at around $479 (about £302, AU$538), the C260 is relatively affordable, and houses some decent components for the price.

There's a 500GB, 7,200 rpm hard drive, 4GB of RAM, 802.11bgn WiFi and built-in LAN, three USB 2.0 ports, one USB 3.0 and a media card reader. There's also an included 720p webcam and speakers, both of which are rather standard. The back also has an HDMI-out port in case you want to hook a second screen up, which is a little unusual, considering how many all-in-one PCs have HDMI-in for hooking up accessories.

The 19.5-inch, 1,600 x 900 touchscreen is also noticeably smaller than some all-in-one PCs within the C260's price range, like the Acer Aspire Z3. Truth be told, all-in-one computers are generally designed as space-savers. Unless you're comparing this system to one with a 23-inch screen or greater, there's not a ton of desk space being freed up here.

While I liked the look and size of Acer monitor better, the Lenovo panel produces a little less glare. Plus, it is surprisingly responsive to touch commands, given the processor inside. However, that's about the only task this computer performs fairly quickly.

A need for speed

If you didn't already guess, the C260's biggest issues are speed and power. While you shouldn't expect much from a PC that costs less than $500, don't expect much punch for your hard-earned pennies. But do expect some whimpering.

It isn't as if this computer was built to run Chrome OS, like the LG Chromebase, and therefore doesn't require much processing power. (Although you could probably get away with setting Chrome to Windows 8 mode and pretend.) Or you could stick with the Windows 8.1 Start Screen interface and try keeping to lightweight apps. Either way, you'll want to avoid taxing the C260 by either using web-based applications or lighter local pieces of software.

Although there are certainly worse systems out there, the C260 is noticeably sluggish. Even simple tasks, like minimizing and maximizing windows and loading videos, have a perceivable half-second redraw. New desktop programs can take a long while to install and run. Apps designed specifically for Windows 8 tend to go a little faster, but performance can be inconsistent.

Other quirks include the keyboard layout, which presents quite the learning curve. The Function key is the last key on the bottom left side, where Control usually sits. So, using keyboard shortcuts like copy and paste is a pain early on. The group of keys on the right side – Delete, Home, End, Page Up and Page Down – are also arranged uniquely with an oversized Delete key. It's also worth noting that both the keyboard and mouse are wired, and together, they account for two of the three available USB 2.0 ports.

The C260's screen is pretty reflective, but it's not quite as bad as some rivals, like the Aspire Z3, and it can be overlooked with some clever placement. Its viewing angles are very good, but the picture can look a little dark, even with the brightness set to maximum.

Another ding is that this computer's built-in speakers don't produce much volume. I had to turn everything up to maximum just to get a decent amount of sound.

Another disappointment is that the computer only has an HDMI-out port. Most other all-in-one PCs offer HDMI-in, so that electronics like Blu-ray players can be used with the screen. Having to use a second screen for other gadgets undermines the space-saving nature of the computer. Combined with the lack of Bluetooth connectivity, the Lenovo C260 seems a little light on features.

That said, at least the microphone picks up audio quite well during video calls (sometimes a little too much). And while camera adjusts well in low light, it produces a grainy, low quality image in even the best conditions.

Next Page Specifications, performance and verdict