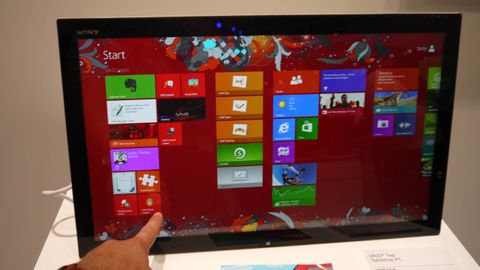 If you are looking for portability, then this isn't the device for you. The Sony Vaio Tap 21 tablet is for those who like things big. It may be classed as a tablet but this is essentially an all-in-one PC system that can be laid flat and use as a Surface-esque table computer.

This isn't the first time that Sony has moved into this computing space. Last year it brought the Vaio Tap 20, but at IFA 2013 it has added an inch and tinkered a touch with the specs.

For a start, the Sony Vaio Tap 21 may have gained an inch on its display but it has shed some pounds – it is now 50% lighter than its predecessor at 3.6kg.

This by no way means that you will be lugging the tablet on to the train to entertain you on your commute but it does look a lot slicker when upright.

The screen resolution has been upped, too. Under the darkness of IFA's show floor – not great for taking photos but IFA is all about the mood lighting – the 1920 x 1080 screen shone bright. This new and improved resolution means it is an ideal device to watch movies on.

The stand on the back of the Tap Vaio 21 now seems easier to use, which means it is a little quicker to change the machine from a traditional all-in-one PC screen to a flat table tablet on which you can play games. We had a go at an air hockey sim and it seemed pretty impressive.

As for the big screen, it was certainly responsive. Sony is bundling a whole host of apps that work with its 10-point touch technology, so you should be able to get a lot of use out of the touchscreen when upright.

Like we have with most touch PCs, though, when there is a Bluetooth keyboard attached, we still get a little confused about whether to prod the screen or touch a key.

This isn't Sony's fault but it may mean some of the touch functionality will be lost when you use it in its non-tablet guise.

As well as the touchscreen apps, Sony is also pre-installing Movie Studio Platinum, Acid Music Studio, Sound Forge Audio Studio software into the Vaio Tap 21. Considering these all add up to around $200 that's an impressive haul.

We're not sure it is enough though to get over the fact that the Sony Vaio Tap 21 feels a little like a gimmick.

It's certainly a powerful machine, that makes use of a Core i7 Haswell chip, but you will need some convincing to choose the Tap 21 over a more traditional all-in-one setup.

Sony has definitely hit on to an interesting thing with the Sony Tap 21 but we're not convinced by its size.