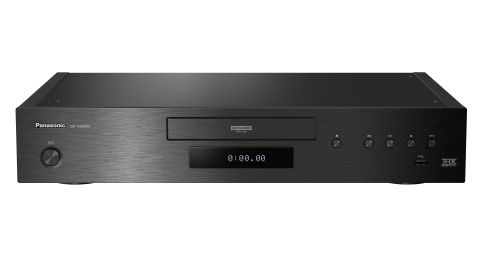 Beautifully built and capable of gorgeous, cinematic UHD images, the DP-UB9000 is the 4K Blu-ray player enthusiasts have been waiting for - and it doesn’t disappoint.

The Panasonic DP-UB9000 is the company’s latest flagship 4K Ultra HD Blu-ray player and, after Oppo started winding down its competing devices, the new model finds itself in a fortuitous position. The absence of Oppo has created a gap at the high-end player market, one that the Panasonic is perfectly suited to fill.

That said, beautifully made and enviably specified, Pana's flagship 4K disc spinner is unashamedly premium. The plastic and tin build, familiar on mainstream Blu-ray players, has been replaced with heavy metal and luxe design. This deck doesn’t just play Blu-ray discs, it cossets them.

Beyond its good looks, however, the DP-UB9000 is also the first UHD deck from Panasonic to support all key HDR flavours: vanilla HDR10, its dynamic sibling HDR10+, HLG and Dolby Vision. The latter is included, despite the fact that Panasonic isn’t supporting Dolby Vision on any of its 4K TVs.

Not only is the player more than capable with images, it has audiophile aspirations as well, sporting high quality DACs, two-channel and 7.1-channel analogue outputs, and Hi-Res Audio support. Toss in a host of smart features, and the UB9000 ticks nearly every box in the book.

Naturally all these flagship features don’t come cheap - but, for those seeking the ideal replacement Blu-ray player after Oppo’s collapse, the Panasonic DP-UB9000 is a more than adequate replacement.

The UB9000 tips the scales at 7.8kg, evidence of its tank-like construction. The double layer top plate and aluminium side plate are separately bolted, while the base of the chassis, also dual layer, consists of 1.2 and 1.6mm steel sheets.

Attention to detail is high: The front fascia boasts a subtle hairline finish, and sports a front facing USB, plus transport and power controls.

Disc loading times are relatively fast, too. The deck takes a heavily authored Goldfinger Blu-ray from tray to main menu in 40 seconds. The disc loading mechanism, affixed to a 1.2mm steel plate, is buttery smooth.

Connections are best in class. In addition to twin HDMI outputs (one of which is audio only), two USBs, optical and coaxial digital audio and stereo analogue outputs, is a full 7.1 channel output, plus balanced Neutrik XLR stereo connectors.

Panasonic has given this deck’s user interface a lick of paint, but there’s no change to usability over previous players from the brand. There are icons for Videos, Music, Photos, Home Network, Network Service and Setup, plus the Panasonic smart portal that brings Netflix, Amazon Prime Video, YouTube, BBC News & Sport and the Berlin Philharmoniker channel.

One cool new innovation is a detailed Playback Info screen, helpfully given its own button the remote control.

This provides a wealth of info derived from the disc’s HDR10 metadata. Curious about just how dynamic your latest HDR disc is? The player will reveal Maximum Frame Average Light Level (MaxFALL) and Maximum Light Level (MaxCLL) data from discs. A quick look at Pacific Rim Uprising reveals that it has a MaxCLL of 1000 nits and a MaxFALL of 863 nits. This is very cool.

For whatever reason, not every disc works - Star Wars The Last Jedi doesn’t want to divulge its metadata secrets, but given the usually limited appeal of info screens, the playback detail offered here is endless fascinating.

That said, the UB9000 supports most disc formats, including Ultra HD Blu-ray, 3D Blu-ray, Blu-ray, DVD and CD. It isn’t a universal player, however, so you don’t get SACD and DVD-Audio playback; nor can it be added at a later date.

The player uses the second generation of Panasonic’s HCX (Hollywood Cinema Experience) processor, which has been specifically designed for 4K playback. This processor includes a 4K high precision edge-adaptive chroma processor, optimised for both BT.709 and BT.2020, and improved chroma upsampling. That basically means improved colour detail in English.

The Panasonic not only supports 4K discs and video streaming services, but can also upscale lower resolution content to 4K. It’s compatible with High Dynamic Range, specifically HDR10, HDR10+ and Dolby Vision. It can also convert HDR to SDR if necessary, and strip-out HDR for 4K, 10-bit, or BT.2020 playback (the latter is a handy feature for 4K projectors).

It’s worth noting that all of these video enhancements are also available on the cheaper Panasonic DP-UB820, so if you’re on a limited budget you don’t need to buy the UB9000 to get the benefit of features like the HDR Optimiser.

In terms of audio, the player includes an HDMI low clock jitter process and supports high-resolution formats, including DSD (11.2MHz/5.5MHz/2.8MHz), ALAC, FLAC, WAV, and AIFF. The UB9000 has also been designed to boost the sound quality of lower resolution content, thanks to High Clarity Sound Premium, Digital Tube Sound with upsampling and 192kHz/96kHz Surround Re-master.

Picture quality on this THX 4K Source certified player is superb. UHD images, powered by Panasonic's second-generation HCX video processor, have a photographic fluidity about them, with reams of fine detail.

The DP-UB9000 also employs a 4K High Precision chroma processor and Multi-Tap filter able to interpolate a 4K 4:4:4 video output from 4K 4:2:0 content that has either SDR/BT.709 or HDR/BT.2020 grading. Panasonic has been using this technology for a while now, and it works spectacularly well. Under the microscope, this interpolation translates to perfect micro curves, with minimised jaggies. On screen, this means superior colour gradations, adding a smooth nuanced look to images.

The player also does an excellent job upscaling regular HD, minimising edge-stepping for a slick, detailed presentation. It’s reassuring to know that player will make the most of any existing Blu-ray disc collection.

But while the UB9000 ticks all the boxes when it comes to video, it falls a little short on audio. This isn’t a universal player, so won’t spin SACDs or DVD-Audio, which means it’s not quite the whole enchilada when it comes to filling the void left by previous premium player king Oppo.

In addition to a dedicated audio power supply there’s a special circuit board for the analogue output which routes left and right channels via a low noise op-amp to those Neutrik balanced outputs.

CD playback is undeniably good, however it falls just short of audiophile grade. The character of its analogue output is a little abrasive, even fatiguing. Perhaps this is driven by a desire to present detail above all else? Incidentally, this isn’t a reflection on its home theatre performance. Bitstreamed immersive audio is wonderfully involving, but performance here is ultimately mandated by decoding electronics and amplification, not the player.

While it doesn’t play SACDs or DVD-A, the DP-UB9000 is Hi-Res Audio compatible. It handles both 24-bit FLAC and DSD files, and it’s with these that it really sounds very good indeed.

In short, the DP-UB9000 is a fabulous 4K Blu-ray player. Its picture performance and overall build quality actually make that lofty price tag look like a steal while cinematic imagery, full HDR compatibility and that powerful HDR optimiser, make this player a must-have for videophiles.

The significance of missing SACD and DVD-A support is less easy to gauge. Given that both formats are all but dead (or in the case of SACD, at least on life support), so you can’t really blame Panasonic for skipping them. But if you have a library of legacy discs, there omission may be more of an issue.

That said, there’s no better UHD player available for less than a grand - Panasonic's DP-UB9000 is a bona fide Blu-ray barnstormer.