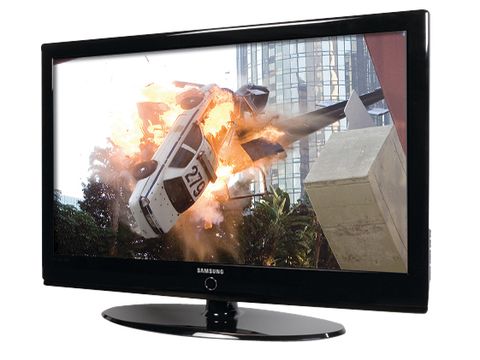 Given its advanced specification, the 40M86/87BD certainly looks good value at around £1,200

Sometimes manufacturers can try too hard. Forget all the fancy features - this is a great LCD without them

We live in an age where competition between established CE marques and ascendant Chinese manufacturers has now become so intense that each is trying to outdo the other with fancy-sounding proprietary technologies - well, certainly the words (or acronyms) used to describe them.

To this end we now have Samsung's Super Clear panel technology, which includes diffusers built into the screen and a specially developed anti-reflective coating to minimise ambient light reflections. Combined with a dynamic contrast system, the result is a 'sky-high' (by LCD standards) contrast ratio - 15,000:1, claims Samsung.

I can tell you right away that Super Clear Panel delivers in spades, producing black levels that genuinely convince. Presented with a blank black source image, the screen looks nearly as profoundly dark as the gorgeous glossy bezel that surrounds it. Try doing something similar with practically any rival LCD TVs and that supposedly black screen will look grey.

It has to be said that during actual TV or movie viewing the black levels achieved never quite match those witnessed during this 'blank screen' parlour trick, presumably because the dynamic contrast feature tries to calculate the best balance between the demands of the bright and dark elements in a typical picture.

But nonetheless, during the police station shoot out sequence in Sky HD's recent showing of The Terminator, Arnie's trademark shades have seldom - if ever - looked blacker on an LCD TV.

Although the Super Clear Panel is probably the single most striking feature of the 40M86BD/40M87BD, it's far from its only trick.

This latter feature is because the 40M87BD's trio of HDMI sockets are all high-spec v.1.3 affairs rather than the still-common v.1.2. As such, the LE40M8 range can handle the extra colour range of the DeepColor system that HDMI 1.3's extra bandwidth makes possible. Indeed, Samsung's Seong Woon Jung told us that the screen supports full 16-bit colour.

The HDMIs also comply with the CEC interoperability standard, known as 'Anytime' in Samsung circles, so that the TV remote can also control any CEC-compatible connected sources from other brands. HDMI v1.3 is also comfortable with the 1080p/24fps. output from Blu-ray and HD DVD players.

Given its advanced specification, the 40M86/87BD certainly looks good value at around £1,200. But before you get too excited about all the tricks at the TV's disposal, you should know that some of those tricks are flawed to say the least.

The Movie Plus mode, for instance, may indeed leave moving objects looking sharper, but it also creates a shimmery flickering effect around the edges of some moving objects that can be more distracting than the resolution loss the feature was designed to correct!

The Edge Enhancer function, meanwhile, can make an image appear over-stressed , especially during HD viewing - hardly the benefit that you might have expected. Finally I urge caution when using the Dynamic Contrast and Black Level boost features, as both can lead to 'empty' dark picture areas and over-aggressive peak whites.

The key thing with all these potentially problematic features, though, is that they're optional. So either use them with care, or ignore them altogether. In short, don't feel a need to switch on every option you're presented with. Don't let them spoil things unnecessarily.