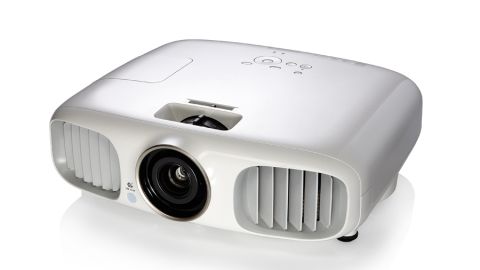 The TW6000W has the same input lag as the TW9000W. It doesn't make it unusable in all games, but you won't really enjoy shooters. It's frustrating, and seriously compromises this projector as a gaming proposition. It's also pricey compared to the competition.

Sibling rivalry can be vicious, as your correspondent's long suffering little brother would know. The poor sap has taken some beatings over the years, but then he's the junior member of the widely-lauded Laird clan.

When it comes to Epson's projectors, however, it looks like this mid-range EH-TW6000W has the smackdown on the pricier Epson TW9000W. It's certainly hard to justify the extra £1,500 based on specs alone.

We're talking full 1080p HD and triple-panel LCD for both. You get WirelessHD and 3D support on this cheaper effort too, although Epson only supplies a single pair of active shutter glasses. In fact, you have to dig really deep to find some noticeable differences.

You lose a couple of hundred lumens, and the claimed contrast ratio drops from 200,000:1 to 40,000:1, but specs like that rarely tell the whole story. The only real act of obvious penny-pinching we object to is the loss of lens shift adjustability. It means the TW6000W is that bit harder to set up perfectly, but we wouldn't call it a deal-breaker.

Eyes on the prize

With all that in mind, it's an intriguing experience to fire up the TW6000W, having just been blown away by the visuals served up by its bigger TW9000W brother. On first acquaintance, there's very little in it.

On the desktop and in-game, it looks awfully similar. Okay, the 9000 is a tiny bit punchier and more vibrant, but we're talking margins. The gap begins to grow in movies - especially ones with dark and moody scenes. Here it becomes apparent that the 6000 simply cannot live up to the 9000's black levels and contrast.

Not that the 6000 is poor. In outright terms, it has strong blacks and excellent contrast. It's just not nearly as impressive as the 9000. In fact, when it comes to blacks and contrast, it's a bit more like you'd expect an modern LCD projector to be: good, but not DLP-monstering good.

In that context, the £1,500 price tag starts to look expensive compared to some of the competition in the sub-£1,000 market. To counter, Epson bundles WirelessHD connectivity and 3D support. The first works effortlessly.

There's almost zero setup - you just plug the adapter into your PC and select the input on the projector. It's seamless, and gives you a lot more options for getting things arranged without cables to trip over. Until we tried WirelessHD, we wouldn't have believed it could deliver so comprehensively on the wireless HDMI premise - but it does.

It's the same with the 3D support - the pack includes a pair of active shutter glasses and jives nicely with Nvidia's 3D Vision tech. It's painless to set up, even if it has the same 24fps refresh limitation at 1,920 x 1,080 as the 9000. Put it all together and you have a strong package, with wireless connectivity and 3D support.

But here's the thing: the TW6000W has the same input lag as the TW9000W. It doesn't make it unusable in all games, but you won't really enjoy shooters. It's frustrating, and seriously compromises this projector as a gaming proposition.