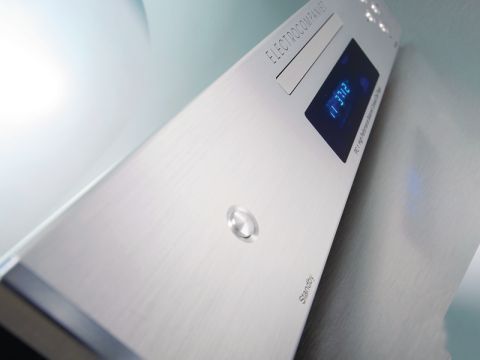 Not a player for all tastes, but we can imagine that those listeners whose collections includes a lot of fine recordings will love it. Balanced interconnection adds flexibility and sound is detailed and precise

In this review we have the new Electrocompaniet PC-1 CD player. Actually, it's not really new, in the sense that big consumer electronics manufacturers use the term, having been around for a couple of years.

But for one thing, it was new to us (partly because Electrocompaniet's UK distribution, which had had a slight hiatus, was newly established only last year) and for another this particular manufacturer likes to keep models around a for while rather than change them at whim.

Given the status it has long enjoyed as aspirational audio devices (thanks, not least, to some of our own reviews down the years) this seems eminently sensible. In fact, the whole Prelude range is a fairly recent addition to Electrocompaniet's portfolio.

It stands as the nearest thing the company makes to budget kit – a concession, if you like, to the way the entry price to 'proper' Hi-Fi has dropped, even though classy kit like most of electrocompaniet's still commands respect.

In terms of features, the PC-1 offers balanced outputs, while the controls echo a classic Electrocompaniet visual style in their arrangement on the front panel and the display is a simple and functional blue dot-matrix affair. A digital output is available for connection to a DAC or digital recorder.

This is a strikingly lightweight player, despite the decently made case (trimmed with solid brushed aluminium for the front panel) and internal inspection soon shows why. There's not much in there!

No surprise really, with component miniaturisation and integration having long ago done away with any requirement for vast and complex circuit boards.

The most conspicuous absentee, however, is the large mains transformer. In this model, power is derived from the mains by a small switched-mode supply, which is more compact and considerably lighter than a regular linear supply.

The disc transport is a DVD-capable one (the PC-1 will, in fact, play DVD-ROM discs loaded with MP3 or WMA files), which means that, like most of its breed, it reads CDs at high speed, multiple times.

This may or may not improve data accuracy, but it does mean that a slight ticking escapes from the unit and also some whirring from the spinning disc, which you may just find audible if the player is near your listening position.

From the disc control logic, digital audio data are passed to the audio board, a small unit assembled almost exclusively with surfacemount components. It features a sampling-rate converter chip which performs the first, crucial stage of digital filtering and outputs a 24-bit/192khz data stream for the cirrus (crystal) DAC chip.

The balanced audio output is handled by a pair of specialised audio op-amps, designed to function in balanced mode at input and output and claiming an eyebrow-raising technical performance.

Electrocompaniet's claimed performance for the whole player is slightly more modest, but still very good and our brief experience with it in the lab confirmed the figures.

Distortion is excellent: jitter is just measurable, but unlikely to be a significant hindrance.

We do have a slight quibble regarding ergonomics. Lack of any search ability from the front panel is common enough, but from there or the remote it seems impossible to select any track other than number one before starting to play. Sure, it's easy enough to skip the instant the player is in play mode, but this seems quite a significant omission.

Direct track access is not available, either, despite the presence of numeric keys on the remote.

As one would certainly hope and expect at this price – indeed at a good deal less – this player basically makes all the right noises from the outset.

The bass is obviously well extended, treble likewise though not shrill and the midrange seems generally neutral. This all seems to apply via balanced or unbalanced outputs: indeed, one of the first things we did was to compare the two (using various amplifiers) and as far as we could tell there's precious little difference between them, hardly surprising when the phono sockets are hardwired to the XLR ones.

But, of course, with any fine audio component it's the minutiae of performance that serves to distinguish it from its peers. In this case, we felt that, perhaps, the most characteristic feature is the way the PC-1 handles the bass, particularly the upper bass.

It is very clear and well-defined, but just a shade on the dry side. Really dry bass is certainly an unlovely thing, but we're only talking about a very subtle degree of it here and it's not by any means all bad.

In fact, in some music it's welcome for the high degree of precision it brings in its wake. Precision is a good thing, and so is extension in the very deep bass, which this player also seems to have in abundance and because both of those areas are well covered the dryness is certainly never objectionable and sometimes not even noticeable.

But the point really is that it removes just a little 'bloom' from a variety of sounds, from plucked upright bass to percussion. If one listens to quick-fire comparisons between this player and another devoid of that particular effect, it's clear enough what is happening.

Heard in isolation, though, the precision is likely to be the dominant impression, the more so because far too many loudspeaker/room combinations are, at least, a touch on the over-generous side in the upper bass and a little throttling-back may be no bad thing.

So we shouldn't harp on about it, especially when, as mentioned above, the deepest bass is rather fine, well controlled and extended.

Up in the treble there's plenty of reach too, not quite on a par with the best high-end players around, but highly commendable nonetheless. If you listen really carefully to subtle treble, for instance; the decay into ambience of consonants in naturally recorded vocals, you may find the smallest degree of truncation, but that's about all there is to it.

Midrange is very nearly faultlessly neutral. Once again, comparative listening may identify a slight preference for female voices over male and for violins over violas – there's a little subjective lift to the upper mid. But you would have to make direct comparisons to spot it and only with the most 'present' of loudspeakers could we imagine it becoming irksome.

We've often remarked on the good correlation between detail and imaging performance and that's largely true here, but if anything the imaging is even more impressive than the detail. Both are good, but imaging has unusual consistency in the depth direction, making the most of those precious few recordings that can make a similar claim.

Which brings us to the suitability of this player for both good and indifferent recordings. on the whole, it's at its best with the former. It is quite good, but not amazing, at making the best of poorly recorded music.

How you regard the importance of that observation will depend as much on your tastes as on anything directly related to the equipment!