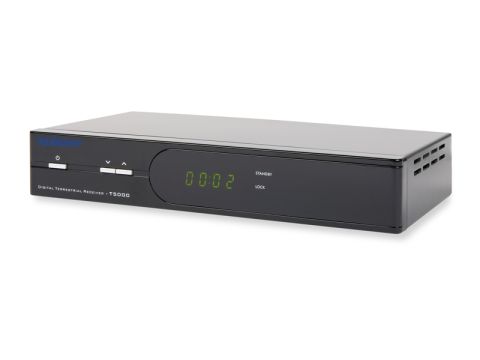 The TF5000 has its faults and is perhaps best suited for use with small-sized, second-room TVs. Nevertheless, it's easy to set up and use (on the whole) and has a sensitive tuner, meaning it should prove a reliable switchover upgrade for many

Icecrypt is a brand hitherto known for its satellite output but, with switchover gathering pace, it has turned its attention to the Freeview market with the T5000 mid-priced Freeview adapter.

Build quality is better than the average Freeview adapter.

Its compact black casing is fronted by a green LED display that shows the number of the channel you're tuned to, alongside indicators showing if you are currently 'locked' to the channel you're watching and whether the receiver is in standby.Alongside are buttons for power and changing channels.

In contrast, the remote is rather plain-looking but has a familiar button arrangement that's generally easy to follow save for the odd quirk whereby what's indicated on screen isn't always mirrored on the handset ('page +/-', for example, is actually activated by pressing arrow buttons).

A UHF loopthrough on the rear enables you to pipe the terrestrial signal to your other TV receiving kit and a modulator is included for using the adapter on TVs with few or no Scart sockets.

Twin Scarts see RGB and composite supported on the TV Scart while the second can be used to make timed recordings to a VCR or DVD recorder. There's an S/PDIF output but no phono option for analogue die-hards.

As far as software goes, the T5000 has an air of its satellite siblings about it. Indeed, while most will doubtless stick with the automatic scanning option, you can search for individual channels if you prefer by channel or frequency, with signal strength and quality bars provided.

Channels are accessed from a central list that can be toggled to show TV (whereupon the current channel is displayed in the top-right of the screen) or radio only. They can be deleted, sorted by A-Z, Z-A or into FTA-only, organised into one of eight renameable groups (e.g. favourites lists) and PIN-locked.

As mentioned, you can also lock the adapter to a specific channel. The full-screen EPG (oddly not covered in the manual) is an acquired taste, being a full-screen effort split into three parts which you skip between by pressing a number on the remote.

Six channels at a time are listed in the top left and selecting a channel brings up now-and-next programme information in the top right.

Shown underneath is a full list of programmes for the rest of the day where you can skip ahead to see what's on subsequent days. You can also bring up synopses.

Strangely, the latter is not possible from the information bar – pressing 'Info' brings up a lot of technical information instead, which will keep installers happy at least.

An eight-event timer has once, daily, weekly and monthly repeat options, and there's a sleep timer.

The TF5000's tuner appears to be very sensitive and we had no trouble pulling in all Freeview channels available in our Central London test location.

However, picture performance is decidedly average – especially on large-screen (above 32in) TVs where even images outputted in RGB can be a tad soft and palelooking. That said, audio is crisp via Scart (providing your TV's speakers are up to scratch, of course) and the digital audio output.

Red button text and interactive services are supported and take only seconds to load. You can alter the style and transparency of the onscreen display and there are three games to play – Tetris, Snake and Othello – overlaid on the current channel.