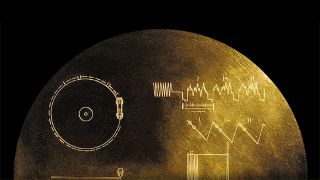 Music for the aliens.

If you're of a certain age you'll remember NASA launching two Voyager spacecraft in 1977, probes designed to fly beyond our solar system and perhaps greet any alien lifeforms that are out there.

One of the artifacts on board the spacecraft was an audio mix of life on Earth. This Golden Record included sounds of wind, thunder and wildlife, and NASA has now uploaded the recordings to SoundCloud in their entirety.

It's not the first time these clips have been available online but they've never been officially collected together before in such good quality and in their original order on the disc.

Hear greetings in Welsh, Urdu and dozens of other languages, as well as the sounds of a train, a horse and cart, and human laughter. Then imagine what extraterrestrials might make of them.

Both Voyager 1 and Voyager 2 continue to fly away from Earth at a rapid rate - Voyager 1 has the honour of going further out into space than anything made by man before or since.

Whether or not advanced alien lifeforms have the necessary hi-fi equipment to play the golden record isn't certain; but at least now they have SoundCloud as a backup if they can reach our planet's Wi-Fi network.