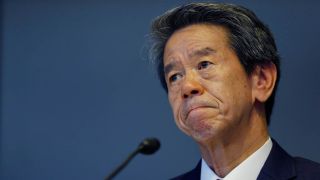 Last week, it was reported that Tanaka, along with board members that include Vice Chairman Norio Sasaki, will step down in September after the discovery of accounting irregularities.

It turns out September might not be fast enough. Tanaka has resigned effective immediately after details from a scathing report conducted by an independent investigating committee hired by Toshiba was published Tuesday morning.

Tanaka and his board had overstated profits by more than $1.2 billion (£780m) over a seven-year period. Additionally, Tanaka is said to have encouraged business heads to cook the books shortly before the end of financial quarters when it appeared that their divisions would not reach the unattainable goals set by Tanaka and his board of sixteen executives.

As a result, Tanaka, Sasaki and seven other board members stepped down Tuesday morning. Board Chairman, Masashi Muromachi, will serve as the company's interim Chief Executive.

Toshiba, which has more than 200,000 global employees, is responsible for producing the world's first laptop and DVD player, among other devices. It is also a huge producer of nuclear power technology.