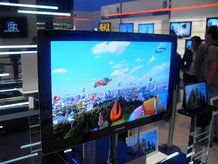 It's that time of year again. As 2008 ended, our tech-obsessed thoughts were already turning to what the next 12 months will have in store. And we won't have to wait long either, the Consumer Electronics Show starts next week in Las Vegas – so expect all the big guns to wheel out new kit for starters.

A fixture at CES is the Microsoft keynote, so we're expecting yet more details on Windows 7. TechRadar Editor Paul Douglas is expecting the Windows 7 beta to appear. "Could the download be made available when Steve Ballmer delivers his pre-CES keynote address on 7 January 2009? Seems like a great time for the beta to break cover to me."

"Steven Sinofsky will keep Windows 7 development on schedule - there will be none of the delays that plagued Vista. So we can expect Windows 7 to come out of beta and be released to manufacturing in the fourth quarter of 2009. It's possible that the final version of Windows 7 will launch before the year is out, but I think 30 January 2010 is more likely, exactly three years to the day from the launch of Vista. Office 14 will launch in the same week." 2010 predictions already?

2009 will also be a huge year for mobile, with many Android-powered handsets set to launch – not least from Sony Ericsson who as recently joined the Open Handset Alliance and Nokia set to go properly touchscreen

"I'm hoping to see a real fight in the mobile phone space to deliver what mobile phone users actually want. The high end sector has been given a real kick since the iPhone was launched, but only now are we seeing the 'fruits' of Apple's actions," reckons TechRadar Journalist Gareth Beavis.

"Nokia has been decidedly lacklustre in the touchscreen market, so the N97 will hopefully be the precursor to the proper iPhone beater, and the INQ1 Facebook phone should set a decent precedent for what low end phone functionality should be about."

"Ultimately, the consumer needs a phone that just does what they want, so be it a better web experience, a more intuitive media player or simply a camera that properly takes on the compacts, 2009 will be another breakthrough year for the mobile phone industry."

As for home ent tech, Reviews Editor James Rivington thinks a clear trend is going to emerge. "2009 is likely to see the continued prevalence of cheap Chinese-made imports, while high-end kit moves ever further out of our reach. For this you will be able to thank the credit crunch, which couldn't have come at a worse time for the consumer electronics giants like Panasonic, Sharp and Samsung."

And then, of course, there's OLED. Expect a lot more of that at CES.

James says: "Look out for a small flood of OLED TVs making it to market, as well as LED-backlit TVs putting old-style LCD panels to shame.

"But don't expect to see many of them anywhere other than in a John Lewis store window. Because the cheap mass-produced LCD panels are going to be the mainstay for a good while yet. A struggling economy will inevitably create a big divide between, say, Samsung's forthcoming super-expensive 31-inch OLED TV and what the rest of us can afford."

And then there's 3D. "I think 2009 is going to be a breakthrough year for 3D, at least in the sense of it building a head of steam as the next must-have tech upgrade," says Editor-in-Chief Nick Merritt. "The technology is closing in and it works: from Hollywood, with James Cameron blazing trails with Avatar (out in December) and rapid installation of 3D in theatres; from the broadcasters, with Sky putting in an impressive demo just a few days ago and from the manufacturers, who will be showing working 3D TV sets at CES."