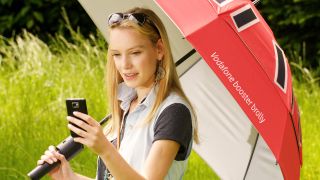 No, we don't know why she's using it when it is sunny either

Rihanna would be proud - Vodafone has come up with a new gadget for the upcoming festival season which looks suspiciously like an umbrella, but… well, it is an umbrella but one that has its very own phone transmitter and phone recharger built in. Created by Dr Kenneth Tong, a lecturer at UCL, the gadget is "a bit of a James Bond umbrella – you can't tell what it does from the outside".

While we can't see the device appearing in the upcoming Bond movie – unless Dr Tong manages to find a place for a gun/knife/car/bowler hat with a serrated edge/a gold finger – it will make its debut at the Isle Of Wight festival. [Vodafone]

Holo, I love you – Two of the more famous Jims are to follow in the footsteps of faux 2pac and are to be made into holograms. Both Jimi Hendrix and Jim Morrison – no, not Jim Davidson and Jimmy Krankie – are set for a holographic comeback, according to the

. Bear with us as we shed real tears over this news. Please, holo-people, leave our music legends alone. [

Hip-shop, you don't stop – Rapper-turner-headphone-maker 50 Cent decided to turn salesman this week, appearing on QVC to flog his rather large and expensive cans. The result is one of the most excruciating videos you will ever see starring a rap artist. Yes, worse than Vanilla Ice in the Turtles video all those years ago. [YouTube]

Hugh have 20 seconds to comply – Nice guy Hugh Laurie is set to play the CEO of OmniCorp in the upcoming remake of Robocop. While a remake of one of the '80s most seminal films still sounds hideous, Laurie could well be great casting. And we can't wait to see if he has enough menace to make one of his employees wet himself in the bathroom. [SlashGear]

Galaxy quest – The oldest galaxy ever has been found by a team of Japanese astronomers in Hawaii. Well, the team were in Hawaii not the galaxy as that would just be silly. The galaxy is apparently 12.91 billion years old – give or take a few days obviously. [Independent]

Bieber Browser – Justin Bieber is now so famous he has his very own browser skin. Designed by Maxthon, the browser uses a number of images of Bieber and is personalised for those are 'true Beliebers' apparently – something Google isn't, considering what comes up on Instant Search when you type in "Justin Bieber is". [SlashGear]

Jay-Z hates being wired – Jay-Z has decided not to go down the tried and tested route of bringing out his own headphone range (see QVC's very own 50 Cent above). Instead he is partnering with Duracell in the much less sexy arena of wireless charging. We wonder if these means that he has managed to whittle down his problems to a mere 98. [Stuff]

iOh, dear lord what have they done? – Apple has decided to add an interesting detail to iOS 6. If you tilt your iDevice the UI will change the reflection of the volume button at the bottom of the screen. Yes, it's completely pointless but you have to admire Apple's attention to detail - well as long as it's not to the detriment of iOS 6 being a broken, unworkable interface that does nothing but look a little bit pretty. [The Verge]

Microsoft hearts Sony – Microsoft is apparently completely obsessed with Sony. Not in a sexual way you understand but in a 'we must know what the company is doing at any given moment' sort of way. This is according to former Microsoft exec Peter Molyneux. [GamesIndustryBiz]

It's been emotional – And not only is Microsoft obsessive, it is also looking to tap into your every emotion with a patent that sees the company offer targeted adverts depending on your mood. Scary, slightly Orwellian, stuff. [Engadget]