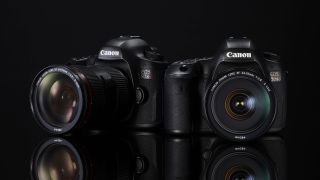 The 50.6MP Canon EOS 5DS was launched some three and a half years ago. In that time it's still managed to retain its title of highest-megapixel full-frame camera available, but compared to the likes of the 45MP Nikon D850 and 42MP Sony Alpha A7R III, it's starting to look a bit tired.

Now CanonRumors.com has heard faint rumblings that, rather than replacing the EOS 5DS with a DSLR, Canon could opt for a mirrorless replacement.

This doesn't sound as dramatic a potential move as it may first appear. The EOS 5DS has always been a bit more of a niche camera compared to the EOS 5D Mark IV all-rounder, so if Canon did decide to take this approach, it would be likely to cause less unrest among existing users.

The 5DS is a camera that's found its way into the kit bag of landscape, commercial and architectural photographers, with quite a few using adapters to enable them to use lenses from other brands, so making the transition to Canon's new RF mount, which is used by the new EOS R, wouldn't be that much of a step-change.

Going mirrorless in many ways makes sense. Canon's new EF to RF lens adapters are available with built-in circular polarizing and neutral density filters. This would reduce the size of kit photographers would need to carry, around as these adapters and filters are considerably smaller than the filter and holder combos that sit on the front of the lens, while the potentially smaller form factor of the new camera compared to the EOS 5DS will also have weight-saving advantages.

It's also likely that the new camera would have a vari-angle touchscreen, making composition and critical manual focusing that much easier – a huge leap from the fixed display on the EOS 5DS.

Time will tell. It could be that Canon opts to fuse the EOS 5DS with the EOS 5D Mark IV to make a credible rival to Sony Alpha A7R III and Nikon D850 to create a camera that combines a high pixel count with high-end performance.