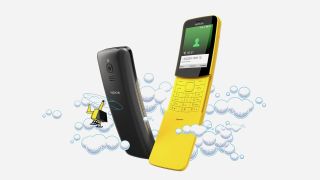 The Nokia 8110 4G, affectionately known as the banana phone is getting one of the most popular applications released for it. Users of this KaiOS based phones will finally be able to WhatsApp using the enigmatic yellow phone.

Announced during MWC 2018, the comeback of the Nokia 8110 4G certainly created some noise. Mostly targeted as a secondary phone, the 8110 appealed to an older crowd for nostalgic reasons.

However, the functionality of the 8110 4G was limited due to the lack of apps commonly found on iOS and Android platforms. This, could also be considered as a selling point for the banana phone, giving the hyper-connected user a break.

But WhatsApp is a key requirement for many- like phone calls and text messages. And those users can now put their main smartphone away during times they don't want to be bombarded with data and carry on with the Nokia 8110.

Other apps already available on KaiOS include Google Maps, Facebook and Twitter. WhatsApp can be downloaded from the KaiOS store on your Nokia 8110. While text messaging and sending photos/videos works well with it, it currently does not support voice messaging or calls.