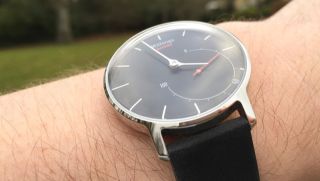 There are two different kinds of people who buy fitness trackers. The first are athletes – people like our own Gareth Beavis – or at least those who aspire to athleticism. The second group is bigger, both in the sense that it contains more people, and that those people are probably carrying a few extra pounds. I fall – heavily, plumply, resignedly – into that latter camp.

For me, and for many like me, I think, a fitness tracker such as the Jawbone Up24, Nike FuelBand SE or even the Apple Watch is about trying to motivate us – shame us, even – into being less sedentary.

I've been wearing fitness trackers of various kinds, and tracking my weight with a set of Wi-Fi connected scales, for years, and I've been fascinated to watch the subtle psychological effect the mere act of gathering data and paying attention to it has on my general health.

If you know you're supposed to walk 10,000 steps in a day and you see, as 5pm draws near, that you've only walked 4,000, you might opt to walk home rather than take the bus. With an altimeter in your phone, when you reach to press the button to call the elevator you might recall that you only walked up five flights yesterday and so take the stairs instead to try to beat your record.

If you're trying to lose weight, you'll notice a little up-tick in a graph long before you feel your trousers starting to tighten, and can then decide that no, you won't have that brownie with your morning coffee. Thus, slowly, but inexorably, day by day, you improve. You walk more. You take the stairs. You lose weight – not so much by actively losing weight but by refusing to gain it. You're gamifying your health.

To be sure, this only works if you're predisposed to being persuaded in the first place. If you see the graph going up but your only reaction is 'ah well; I'm a lost cause so pass the pies' then tracking your weight ain't gonna help. But if you can be nudged to improve your activity levels by being easily reminded of how little you've done so far, then great.

That's one of the reasons I love wearing the Activité watch from Withings. In anticipation of reviewing its cheaper sibling, the Activité Pop, when it hits in the spring, I borrowed the original Activité from Withings, and it's been revelatory.

Why? Because on the surface it's a perfectly ordinary watch – all the smarts are behind the dial, and it syncs over Bluetooth 4. As well as telling the time with traditional analogue hands, there's a single inset dial with a hand that shows your progress towards your step goal.

By taking an old-fashioned approach to 'data display' (that is, actual, physical moving objects rather than a do-anything but transient screen) Withings has ensured that the data is always visible. I know it sounds a bit obvious, but the effect is remarkable. Now, every single time I glance at the time I can't hide from how inactive I've been up to now. And so I can do something about it.

The Activité isn't the only fitness tracker that can force you to confront your laziness in this way – the always-on e-paper display of the Pebble can be configured to show activity levels, for example – but this confrontation is key to improving your general health with the help of one.

One huge, fundamental potential flaw in most fitness trackers, you see, is that you have to _do something_ with them before they tell you how far along your activity goal you are. You have to press the button on a FuelBand, you have to sync a Jawbone Up with your Android phone, you have to unlock your iPhone and launch the Health app.

This means that it's all too easy to ignore your progress, and what's more, to ignore it until it's too late in the day to make the changes you need to in order to hit your goals. What use is it if you realise you're only 50% towards your activity goal if you only think to check in when you're relaxing in front of the TV after dinner?

In fairness to these devices, the reason you have to trigger their display, or to sync the data to a device that has a display, is because keeping screens or even just a grid of LEDs lit burns through batteries, and you absolutely can't have an activity monitor crapping out before the end of the day.

Athletes might get away with checking their activity tracking only after having completed a run or a workout session, but for those of us who need encouragement not even to be fit but just to be less sedentary than our lifestyle permits, then we need our activity trackers to force us to confront our sloth, like a foot-tapping, tutting schoolmarm.

On which note, I'm off for a walk.