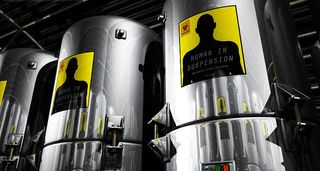 A 14-year-old girl who died of cancer has been cryogenically frozen in the hope that one day in the future she could be brought back and cured.

Shortly before her death, the girl, who cannot be named for legal reasons, won the right to be cryogenically frozen in a landmark court case. After being diagnosed with a rare form of cancer and being told her illness was terminal, the girl began to research cryonic preservation online and decided she wanted to be frozen after her death.

As she wasn’t old enough to create a will, the girl had to have the permission of both of her parents to undergo the process. Though the girl’s mother supported her wish to be preserved, her father did not agree and as a result she appealed to a High Court to intervene and grant her mother control over what happened to her body.

On October 6, the judge granted her mother this right, though stated he was not making any ruling about the proposed preservation itself. The girl’s mother has followed her wishes and her body has been frozen and taken to a storage facility in the United States, making her only one of ten Britons who have been cryogenically preserved - and the only British child.

This is a decision that has raised moral and ethical questions. According to the Telegraph the judge and the girl’s doctors “expressed serious misgivings about the process” which was apparently “disorganized” and “caused real concern” to the hospital staff. It's especially controversial as there's currently no proof that the process of cryonic preservation can actually be reversed.

Cryonic preservation, though legal, is currently unregulated in the UK. As a result of this case, the judge has suggested that  “proper regulation” of the process should now be strongly considered.

Cryonics UK, the non-profit organisation that prepared the girl’s body for transport to the US, agreed with the judge, stating that “future regulation will help hospitals to know where they stand legally and procedurally.”