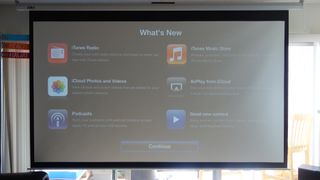 This is what you should be seeing, but probably aren't

Update: Aaand it's back.

It looks as though Apple has ironed out all the wrinkles of its crinkled Apple TV version 6.0 and has released yet another update today.

According to 9to5Mac, the new version is still called Apple TV Software 6.0, but the build number is new. It should, fingers crossed, bring all the perks of the original update, such as iTunes Radio, without bricking people's TVs.

Even more scarce than the gold iPhone 5S are Apple TV owners not experiencing a problem with firmware version 6.0 that went out on Sept. 20.

Apple has pulled the Apple TV update due to the deluge of "hobby box" owners who complained that the new software permanently bricked their set-top box over the weekend.

A handful of others have complained about internet connection problems, something that has plagued Apple TV devices in the past and resulted in a recall earlier this year.

While TechRadar was able to successfully update to Apple TV 6.0, the download took approximately three minutes, but the install took an unusual 30 minutes to complete.

Apple has since suspended the update for all devices that are safely running Apple TV 5.3.

Apple TV update 6.0 isn't as a dramatic change like iOS 7, but it does add Apple's Pandora-like iTunes Radio service, the iTunes music store and Podcast syncing to the device.

A successful update also brings about iCloud support, allowing users to view photos and videos shared with the the device through a photo stream or play a video from the iTunes cloud using an iOS device.

For now, these unavailable feature are all just a tease, or for a handful of bricked users a slap in the face.

We've contacted Apple in order to find out when a fixed Apple TV update 6.0 is expected.