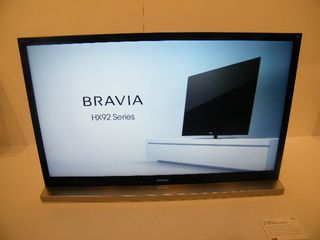 Sony refreshed its Bravia television line-up at CES 2011, with the Sony Bravia HX923 being standout.

Sony's Bravias have always oozed style and the HX923 is of no exception, but there is real substance behind the TV as well.

The slight lean on the panel makes sure that the viewing angle of the TV is optimised and the optional stand is definitely a statement of intent.

Within the relatively slim chassis – the HX723 is slimmer but the HX923 packs more of a cinematic punch – there are a number of technological features to make the picture sparkle.

These include: Intelligent Peak LED, Motionflow XR 800 and 3D viewing with X-reality PRO.

Unlike some other TV manufacturers, Sony is offering two pairs of glasses in the box. Considering active shutter glasses still come at a premium price, this is a decent move by Sony.

Sony's on-demand service Bravia Internet Video has also been ramped up and can be accessed through the connected Bravia set.

As you are dealing with internet video, Sony has included something called X-Reality PRO which is a dual-chip image processor that is said to produce true-to-life images and can boost low quality pictures from the web to near-HD resolution.

It is impressive, though you still get artefacts and stutter in the web content – especially on the bigger screens.

You also get Skype compatibility and the HX923 comes bundled with a webcam, which is an added bonus.

TVs in 2011 are a mash-up of 3D and connected devices, with the Sony HX923 showing off both of these technologies superbly.

UK release date and pricing are still to be confirmed.