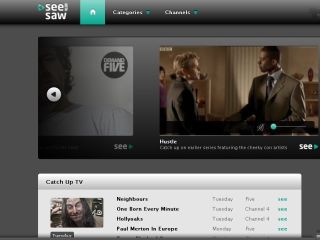 SeeSaw owners Arqiva has joined up as a full partner in Project Canvas, as the companies behind the IPTV scheme insisted that the collaboration should not be considered a merger by the Office of Fair Trading.

Arqiva joins the BBC, BT, Channel 4, Five, ITV and Talk Talk in the partnership – which is aiming to bring a set of standards, brand and user interface for IPTV within the UK.

Arqiva is a specialist in communications infrastructure, and the owner of SeeSaw – the IP video on demand project that uses technology from the defunct Project Kangaroo.

This could see concepts developed for Kangaroo – a project led by the BBC to offer programmes from UK broadcasters BBC Worldwide, ITV and Channel 4 – appear in Project Canvas.

Arqiva bought the Kangaroo technology and assets for £8 million after the Competition Commission ruled against the collaboration in 2009.

The company then launched SeeSaw, using this technology, in February 2010, with programmes from BBC Worldwide, 4OD Demand Five and other content owners.

"We are delighted that Arqiva have committed themselves to the project," said Canvas' Project Director Richard Halton.

"They have a history of positiveand progressive support for Freeview, and Project Canvas will benefit hugely from both their experience and engineering expertise."

Rob Hamlin, Strategic Development Director for Arqiva Terrestrial Broadcast, added: "We are delighted to become a partner in Project Canvas.

"Arqiva has a long history in supporting free-to-air broadcasting as a shareholder in Freeview and provider of digital terrestrial television networks, so it is a natural step for us to take a partner role in Canvas.

"The approach of Canvas as an open platform based on common technical standards is one we fully support and are looking to encourage through standards bodies, particularly via the UK's Digital Television Group ('DTG'). "

OFT - not a merger

Meanwhile, the companies involved with Canvas have insisted that the collaboration does not constitute a merger to the Office of Fair Trading.

"The Canvas partners are clear that the joint venture does not qualify as a merger, and we welcome the opportunity to clarify this position formally," added Halton.