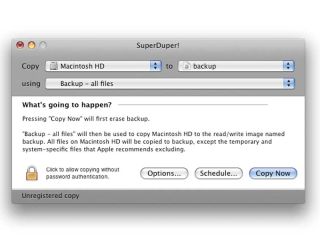 Before deleting documents, back up your whole system to an external drive using software like SuperDuper! or Carbon Copy Cloner

OS X is a great operating system but there are parts of it that can be deleted or trimmed without causing any problems.

This is because, by default, a standard OS X install contains some items that you personally will never need.

They're there because someone will use them, but you probably won't. The two main examples of this are the additional languages and printer files. Before you rush off to start deleting items from library folders, we must point out that you do so at your own risk.

If you're not sure what something is, it's best not to delete it. At the very least you ought to have a Time Machine or Carbon Copy Cloner-created backup of your system before you start deleting things, unless you are sure you know what you're doing.

If you're installing or reinstalling a system from an OS X DVD, choose Custom Install and then deselect the additional printers and languages, and also the X11 and Developer Tools options. For the leanest system, deselect everything but the Base system.

If your Mac came preinstalled, have a look in Macintosh HD > Library > Printers and sort the list of folders by size to see if one is huge, filled with PPD files. The idea in including them is that OS X will be able to recognise many printers.

In truth, you only need the one driver for the printer you are running. You can delete these and reinstall the driver from manufacturer's website.

Getting rid of the languages on your system is a little trickier, as they don't just live in one place. There is a free program called Monolingual that is able to let you strip out all unwanted languages from your system. How often is an English speaker likely to need Arabic, Armenian or Afrikaans on their Mac? It is also able to remove unwanted architectures from your system.

In Universal applications, there is code to run the app on different CPUs. On an Intel Mac, for example, you won't need PowerPC G3 code. Getting rid of it can save space, but be warned, this is a dangerous thing to play around with.

In terms of applications you can safely delete more or less anything, since the apps themselves don't contribute to the running of the system, with a few minor exceptions like System Preferences.

You should leave the Utilities folder alone as well, since it contains assistants and the AirPort Utility to help you. Some programs come with uninstallers, which usually work by you running the installer and, rather than installing, choosing uninstall.

Unlike on Windows these tend to be pretty comprehensive and remove all components of an app, even the system and library files it may have buried on installation. For other programs, there's AppZapper. Billed as "The uninstaller Apple forgot", it lets you drag an app onto its window to delete all associated support files, caches and preferences as well as the app itself.

If you're a fan of installing programs to try them out, it's a great way to ensure that you safely remove them and their associated files when you have finished with them. There are similar programs around – AppDelete and AppCleaner being two of the best. AppCleaner is donationware so need not cost you anything. It also has a "protect" function to make specific apps immune from deletion.