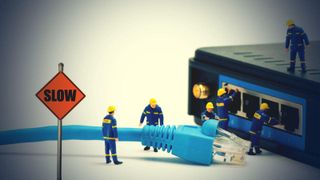 Last month, the Australian Competition and Consumer Commission (ACCC) asked for 2,000 volunteers to sign up to allow the consumer watchdog to monitor the NBN broadband speeds being delivered by Aussie telcos.

Although that specific investigation is a four-year investment, the ACCC is already preparing legal action against the four major Aussie telcos for selling high-speed NBN packages that have failed to deliver on their speed promises.

The ACCC has repeatedly warned the Australian telcos about selling products that promise an ‘up to’ speed if those speeds aren’t realistically possible, or are available for only a part of each day, but has so far not taken any specific actions against the telcos.

Now, however, ACCC chairman Rod Sims has warned that service providers could find themselves in court by the end of the year if they continue to deliver speeds that are lower than advertised.

Buck up or go down

When advertising NBN packages, Mr Sims said that the telcos have been asked to use the term ‘typical’ rather than ‘up to’ when referring to peak-time speeds.

And although all telcos – the big fish or the small fry – are subject to Australia’s consumer laws, Mr Sims said the Commission will target the bigger players, specifically Telstra, Optus, TPG and Vocus. “They have been put on notice and some of them know that they are subject to investigation by us," he said.

Internet Australia, a not-for-profit group representing internet users in the country, supports the ACCC’s decision, but states that legal action won’t necessarily solve the problem “because the NBN Co model is fundamentally flawed”.