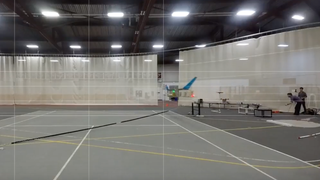 Researchers at the Massachusetts Institute of Technology (MIT) have created a plane that can fly without any moving parts, according to MIT Technology Review.

Traditionally, aircraft both big and small is kept up in the air by a moving part, like a propellor or a turbine within an engine. But instead, this electric plane from MIT uses a Electroaerodynamic (EAD) Propulsion.

This is a completely different way of getting a plane into the air that's fully electric without any rotating propellors, gas turbines or moving parts of any kind.

The experimental aircraft designed by the team at MIT weighs 2.45-kilograms (5.4-pounds) and managed to propel itself 60 meters (200 feet) using EAD technology. And although scientists have known about EAD Propulsion for some time, this is the first instance when it's been used to propel a plane.

To get the plane up into the air, the EAD thruster produces thrust from electrical energy. That means no part of the plane needs to move to get it going. Instead, it uses high voltages of electricity to create ions in the air around the plane.

When a high enough voltage is applied across two electrodes of different sizes, the electric field that's around the smaller electrode becomes really high. That means electrons are knocked around the air molecules that surround it.

This produces lots of positively charged ions. An electric field then accelerates these ions from the smaller electrode to the larger ones. While moving between electrodes, all the ions collide with neutral air molecules and transfer momentum that produces what's known as an ionic wind.

It's this ionic wind that produces a big thrust force, which is similar to the wind from a propellor minus the moving parts, noise and CO2 and Carbon Monoxide emissions.

So will we see this kind of quiet and clean propulsion tech being added to commercial flights anytime soon? Maybe one day.

According to an interview with the BBC, Professor Steven Barrett from the MIT Department of Aeronautics and Astronautics said: "It might be possible that it could carry people. But it's too early to say yet for sure."

"The path to carrying people with this kind of solid state propulsion would be first hybridising it or combining it with conventional propulsion. And it could be we could find some reason why it couldn't be usable in the future. But it could also be that it's widely used in drones or maybe even larger aircraft too."

He goes on to say that he can imagine a future where we're using lots and lots of drones to carry out various tasks in urban environments and a silent propulsion system like this one would that vision much more possible.